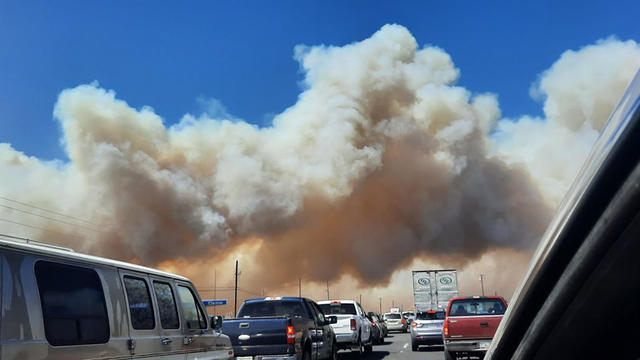 A wildfire near Flagstaff, Arizona has doubled in size overnight, covering almost 6,000 acres. The Tunnel Fire has now prompted more than 700 evacuations as firefighters work to stop the blaze.
The area in the burn radius of the fire is filled with dry grass, brush and Ponderosa pine, according to fire clearinghouse InciWeb. These conditions, combined with windy weather, is allowing the flames to spread northeast. It is currently at zero containment.
The fire was first reported around 4:22 p.m. on Sunday, April 17. The cause of the burn is unknown but is currently under investigation, according to officials. Coconino County officials said Tuesday that 766 homes and 1,000 animals had been evacuated and 250 structures are still under threat, the Associated Press reports.
As the fire continues to grow, heavy winds have pushed it in a path toward the Sunset Crater Volcano National Monument. While this area is less populated by houses and brush, Coconino National Forest spokesman Brady Smith told the Associated Press that the flames could still spell danger for the area.
"It's good in that it's not headed toward a very populated area, and it's headed toward less fuel," Smith said. "But depending on the intensity of the fire, fire can still move across cinders."
More than 200 firefighting personnel have been assigned to the blaze, with a team also scheduled to arrive in the area Thursday. U.S. Highway 89 remains closed from milepost 425 to 435.
This isn't the first time wildfires have threatened Flagstaff, but the blaze is much closer to residents than a similar fire that broke out last years.
"This time was different, right there in your backyard," Kathy Vollmer, a resident, told the Associated Press. She and her husband evacuated with their three dogs but had leave several of their cats behind, facing a "wall of fire," she said. "We just hope they are going to be OK."
Ali Taranto helped a neighbor escape their property on Tuesday who was "disoriented and gasping for air" by the time she reached them.
"To see flames several yards away from your property line and to hear the propane tanks bursting in the background, it was very surreal," Taranto said. "Ash falling down. It was crazy."
source: https://www.cbsnews.com/news/arizona-tunnel-wildfire-evacuations/