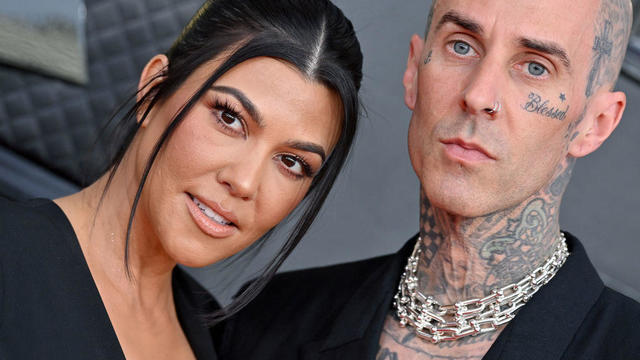 Fans of Kourtney Kardashian and Travis Barker will have to wait a little longer to call the pair a married couple. After multiple outlets reported that the couple got married in Las Vegas over the weekend, Kardashian said Wednesday that the ceremony wasn't legally binding.
After the Grammy Awards ceremony, where Barker took the stage in a special rock performance of "Are You Gonna Go My Way" with Lenny Kravitz and H.E.R, the two went to a Vegas chapel. But Kardashian revealed Wednesday that while a wedding ceremony did happen, the two did not have a marriage license.
"Once upon a time in a land far, far away (Las Vegas) at 2am, after an epic night and a little tequila, a queen and her handsome king ventured out to the only open chapel with an Elvis and got married (with no license)," Kardashian wrote on Instagram, adding, "Practice makes perfect."
A post shared by Kourtney ❤️ (@kourtneykardash)
"Kourtney is super excited to get married to Travis," a source told Entertainment Tonight in January. "Both Kourtney and Travis are so looking forward to spending the rest of their lives together as soulmates."
Kardashian has three children with ex-boyfriend Scott Disdick, Mason, Penelope and Reign. Barker has two children, Landon and Alabama.
Married or not, the pair's relationship will be front and center in the family's new reality series "The Kardashians," which premieres on April 14.
source: https://www.cbsnews.com/news/kourtney-kardashian-travis-barker-marriage-not-yet/