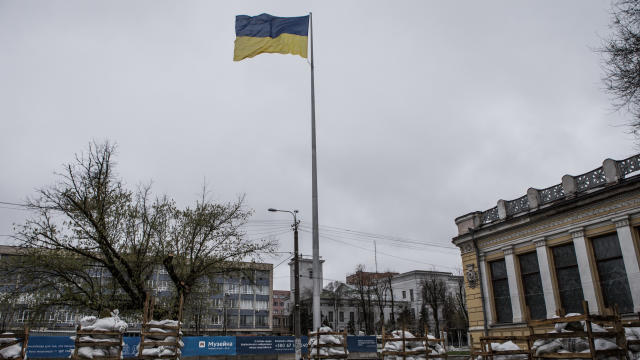 Washington — The United States will send an additional $800 million in weapons, ammunition and other security assistance to Ukraine as the nation continues to defend itself from Russia and prepares for escalating attacks expected in its eastern Donbas region, President Biden announced Wednesday.
The latest package of assistance will contain new capabilities for Ukraine including artillery systems, artillery rounds and armored personnel carriers, Mr. Biden said in a statement. The president has also approved the transfer of additional helicopters, he said.
"The steady supply of weapons the United States and its allies and partners have provided to Ukraine has been critical in sustaining its fight against the Russian invasion. It has helped ensure that Putin failed in his initial war aims to conquer and control Ukraine," Mr. Biden said. "We cannot rest now."
The president spoke with Ukrainian President Volodymyr Zelenskyy for nearly an hour earlier Wednesday, during which he informed his Ukrainian counterpart of the additional $800 million, Mr. Biden said.
"The Ukrainian military has used the weapons we are providing to devastating effect," the president said. "As Russia prepares to intensify its attack in the Donbas region, the United States will continue to provide Ukraine with the capabilities to defend itself."
While Russian forces have retreated from Kyiv, Ukraine's capital, Zelenskyy has warned the war launched by Russia in late February is entering a new phase, and evidence that Russian troops committed atrocities against civilians has continued to mount.
CBS News found evidence of mass graves and bodies in the streets of Bucha, a city outside of Kyiv, earlier this month after Russian troops left the area. The atrocities prompted global outcry, with Mr. Biden calling Russian President Vladimir Putin a "war criminal" last week and accusing him of committing "genocide" on Tuesday during a visit to Iowa.
After suffering setbacks in parts of Ukraine and failing to seize the capital, Putin on Tuesday said Russian troops will turn their attention to the country's eastern Donbas region. The Russian president vowed his "military operation will continue until its full completion."
The U.S. has provided Ukraine with more than $2.4 billion in military aid since Mr. Biden took office, committing more than 1,400 Stinger anti-aircraft systems, 5,000 Javelin anti-armor systems and hundreds of Switchblade drones, among other equipment and weapons, according to the Defense Department.
But Zelenskyy has pleaded with the U.S. and European allies to provide the country with additional heavy weapons such as armored vehicles, air defense systems and military aircraft, warning that failing to do so will result in further bloodshed and destruction.
source: https://www.cbsnews.com/news/ukraine-war-us-military-aide-800-million/