A burglary investigation has led police to a significant discovery of around $40,000 worth of electronic devices allegedly stolen from schools across Auckland. 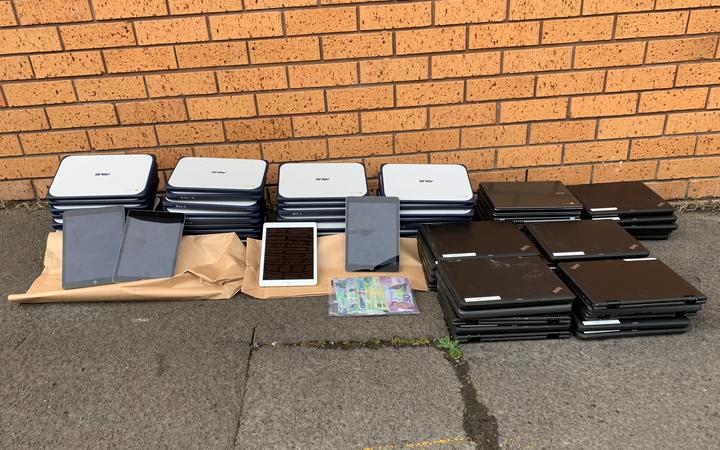 A burglary investigation led police to a discovery of around $40,000 worth of electronic devices allegedly stolen from schools across Auckland. Photo: Supplied / Police

A number of electrical goods were discovered at a Kelston property last week, believed to be from three west Auckland schools.

A 36-year-old man has been charged with the three alleged burglaries and is before the Waitākere District Court.

"Further enquiries led our investigators to a commercial business in Avondale where another search warrant was conducted this week," Area Investigations manager for Waitematā West Detective Senior Sergeant Williams said.

He says at the business 70 laptops, tablets and other devices allegedly been stolen from Auckland schools over the past year were recovered.

"Police have since spoken with the business owner as part of this investigation and this has led us to conducting another search warrant at a Glendene property," Williams said.

"At that property our staff have located a large amount of cash estimated to amount to $100,000."

A man, 41, was charged with six counts of receiving stolen property and is due to appear before the Waitākere District Court today.

Police say the investigation continues and further arrests or enforcement cannot be ruled out.

"These devices are an important and expensive asset for schools, so this is incredibly rewarding for police to be in a position to return these items.

"I would like to acknowledge all the investigation staff that have been working on this matter to date.

Police will be looking to return the items to their rightful owners in due course."