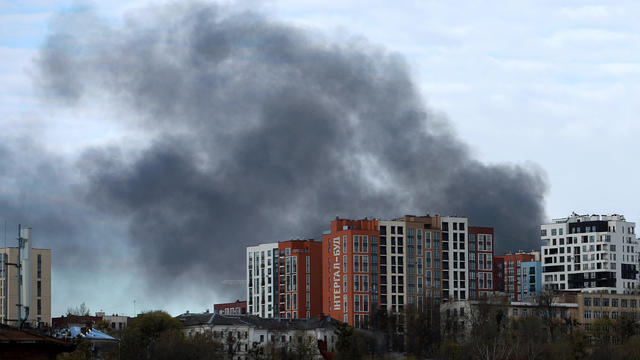 At least seven people including a child were killed in Russian airstrikes on the western Ukrainian city of Lviv on Monday, according to the regional governor. Maksym Kozytsky said four Russian strikes had targeted military infrastructure but that a car tire factory had also been hit. Lviv, which is near Ukraine's border with Poland, has been considered a place of relative safety for those fleeing fierce fighting in other parts of the country.
"What happened today is very disturbing and alarming because this is a very powerful missile strike [on] civilian infrastructure," Yuri Sak, an adviser to Ukraine's defense minister, told CBS News partner network BBC News. "What happened today proves one more time that, while the major build-up of Russian forces continues in the east of Ukraine, the whole of the country continues to be at risk."
Russian state media claimed Russia had struck 315 targets in Ukraine overnight. Ukrainian officials in the southern region of Dnipropetrovsk also reported multiple missile attacks on Monday, saying some projectiles hit areas close to a railway station. Strikes intensified near the capital city of Kyiv as well.
Meanwhile, new pictures emerged that appeared to show Russia's Moskva warship, with smoke billowing from the rear, starting to sink after allegedly being struck by Ukrainian missiles.
After weeks of unrelenting onslaught, Ukraine's Prime Minister said his forces were continuing to make a stand in the coastal city of Mariupol, despite renewed threats from Russia that any remaining Ukrainian soldiers would be "eliminated." In a sprawling steel plant and the series of tunnels beneath it, a pocket of Ukrainian troops were holding out, defying the ultimatum from Russia to surrender or die.
On Sunday, Ukrainian Foreign Minister Dmytro Kuleba told CBS News' Face the Nation that Russia was razing the city at any cost.
"The situation in Mariupol is both dire militarily and heartbreaking. The city doesn't exist anymore," Kuleba said.
In Kharkiv, medics treating an injured women were forced to dive for cover to save their own lives in the middle of an artillery attack.
Russia's ministry of defense on Monday claimed Ukraine had so far lost 23,367 troops in the war. NATO estimates that up to 45,000 Russian troops have been killed, captured, or injured since the invasion began.
Haley Ott is a digital reporter/producer for CBS News based in London.
source: https://www.cbsnews.com/news/lviv-ukraine-russia-war-six-missile-attack/