NFL's Dwayne Haskins ran out of gas before he was killed, 911 call shows 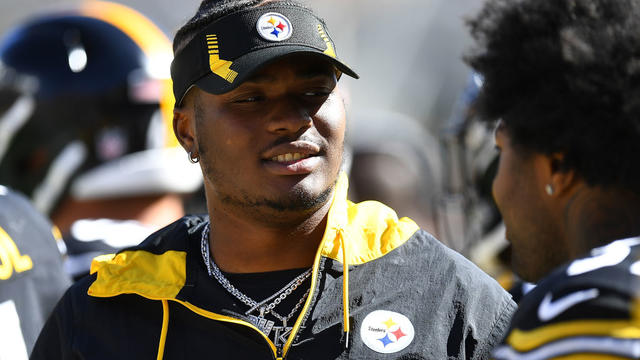 Pittsburgh Steelers quarterback Dwayne Haskins ran out of gas before he was fatally struck by a dump truck earlier this month, according to new 911 calls released by the Florida Highway Patrol. The call was made by a woman who identified herself as Haskins' wife, Kalabrya Haskins.
The caller told 911 that Haskins had called her earlier to say he had run out of gas and was walking to get more. She said Haskins had said he would call her back, but she had not heard from him, so she called 911.
Much of the call is redacted or difficult to understand, but the dispatcher did tell Kalabrya Haskins, "I don't want you to panic, but I am going to be honest with you, we do have an incident on the highway, but I can't confirm if that's your husband or not."
Florida Highway Patrol on Wednesday also released several other 911 calls from witnesses who saw the fatal accident,
The 24-year-old quarterback was killed while trying to cross Interstate 595 in Broward County at around 6:40 a.m. on April 9.
According to an accident report that was also released Wednesday, Haskins was first struck by a dump truck, which sent him into the path of another car that also struck Haskins.
Before joining the Steelers in 2021, Haskins had played for the Washington Commanders. He was drafted to the NFL in 2019 after playing for Ohio State University, where he was a standout player and a finalist for the prestigious Heisman Trophy.
Steelers head coach Mike Tomlin was the first to confirm Haskins' death.
"I am devastated and at a loss for words with the unfortunate passing of Dwayne Haskins," Tomlin said in a statement posted to the Steelers' Twitter account. He called the quarterback a "great teammate" and "a tremendous friend to so many."
Commanders head coach Ron Rivera called Haskins a "talented young man who had a long life ahead of him."
"I know I speak for the rest of our team in saying he will be sorely missed," Rivera said in a statement. "Our entire team is sending our heartfelt condolences and thoughts and prayers to the Haskins family at this time."
Sophie Reardon is a News Editor at CBS News. Reach her at [email protected]
source: https://www.cbsnews.com/news/dwayne-haskins-death-ran-out-of-gas-911-call/