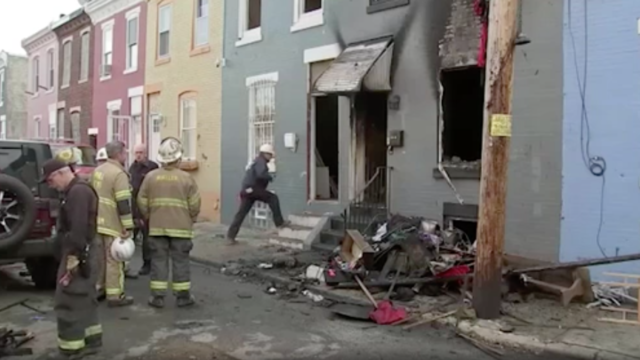 An early morning fire at a rowhouse in Philadelphia killed three children and one adult, the city's fire department said Sunday. Twenty-one people have died in fires in the city since January.
Authorities responded to the single-family home after receiving a call about a reported fire just after 2 a.m. Saturday in the city's Kensington neighborhood, fire commissioner Adam Thiel said at a press conference. Firefighters found a "heavy-volume" fire coming from the first and second floors of the home, but they were able to enter and "mounted an aggressive interior attack and search for life."
"As they went inside they were able to start to knock down the fire. They were able to put hands on one of the juveniles inside, and unfortunately it was too late," Thiel said. The four victims' causes of death have not yet been determined.
One person was able to escape the fire and was taken to the hospital. That person was either in stable condition or may have already been released, according to Thiel.
Authorities believe five people were in the home at the time of the fire. The victims' relationships to one another were not disclosed by fire officials.
The incident remains under investigation. Authorities do not know what caused the fire.
"Folks, Philadelphia has a fire problem. And we need your help because fire is everyone's fight," Thiel said.
Since January, 21 people had been killed in fires across Philadelphia. Twelve people died in a fire in January, and five others have been killed in fires since then. Thirty-eight people have been injured, and 312 families — or 758 people — have been displaced due to fires. The city's Red Cross House, which takes in displaced people, is 95% full, the fire commissioner said.
"In addition to the incredible work of our firefighters, our medics, our EMTs, our dispatchers, our fire marshals, we are still averaging seven to eight severe fires every day," Thiel said. "One of the busiest fire departments in the nation."
He said they're not only responding to incidents, but they are also installing smoke alarms "nonstop" — 4,271 alarms since January 1.
"Yet we are still seeing fires where there are no working smoke alarms," he said, urging people to call 311 for smoke alarm installations and fire checks.
"Folks, we are out here doing every single thing we can — 24/7, 365. We need your help to keep our city safe, to keep our neighbors safe," Thiel said.
Sophie Reardon is a News Editor at CBS News. Reach her at [email protected]
source: https://www.cbsnews.com/news/philadelphia-fire-kensington-four-killed-04-24-2022/