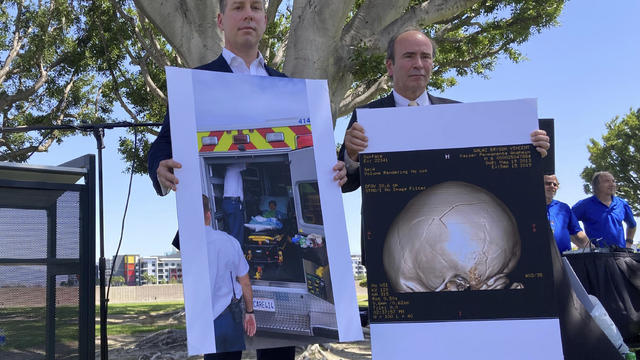 A 6-year-old boy suffered a fractured skull and brain damage when he was accidentally hit by a baseball thrown by a Los Angeles Angels player who was warming up before a 2019 game, according to a lawsuit announced Thursday that blames the injury on the team's negligence.
The lawsuit by the boy's mother Beatrice Galaz said the team should have more netting along the side of the field and players shouldn't throw balls during warmups in areas where spectators could be struck, especially when the team is encouraging fans to arrive early to try to meet players.
On Sept. 15, 2019, her son Bryson was walking with his father in the first row of stadium seating toward the dugout, where players were meeting fans and signing autographs more than an hour and a half before the game, the lawsuit said. He was struck on the side of the head when pitcher Keynan Middleton, who was warming up on the field, threw a ball toward another Angels player who missed the catch.
Bryson was rushed to the emergency room in critical condition and sent to a children's hospital for monitoring for 2 1/2 days, said Kyle Scott, the family's lawyer. Since then, Bryson - now in third grade - has done fine academically but has difficulties paying attention and with social interaction, and medical exams show abnormal brain activity, which raises concerns about his longer-term development, especially as school subjects become more complex, Scott said.
"We're grateful that he pulled through, but since that day he has struggled in school," Galaz, of Anaheim, said in a statement released Thursday. "He's simply not the same."
The Angels declined to comment on the litigation.
"No parties have reached out to us regarding this lawsuit," said Angels spokesperson Marie Garvey. "We have only been made aware of this by the media, so we are unable to comment at this time."
The lawsuit filed April 1 was announced on opening day for Major League Baseball at a news conference near Angel Stadium, where the Angels were due to host the Houston Astros later in the day.
Getting a baseball at an MLB game is a signature event for any fan but it can come with a cost. While very rare, fans sometimes suffer serious injuries from balls or even bats that fly into the stands. Angel Stadium and other major league parks have expanded protective netting in recent years to increase safety.
In 2015, MLB encouraged teams to have netting or screens that extend in a semi-circle between the ends of the dugouts closest to home plate. That push increased in 2017, and by opening day 2018, all 30 ballparks had netting that reached at least that far.
At the end of 2019, the league said some teams would extend the netting. That's the same year a 79-year-old woman died four days after being hit in the head by a foul ball that sailed over protective netting at Dodger Stadium. It was believed to be the first foul ball death at an MLB stadium since 1970, when another Dodger Stadium fan was killed.
Also in 2019, a 2-year-old girl was hit by a foul ball during a Chicago Cubs-Houston Astros game. In 2020, the family's lawyer said she had a "permanent" brain injury and could possibly be on medication "for the rest of her life."
Scott, the Galaz family's attorney, said since Bryson's injury, Angel Stadium has extended netting a section beyond the dugout but that would not have prevented the accident. Extending it farther down the foul line and not having players warm up by throwing the ball in the direction of stadium seating could have made a difference, he said.
Keith Bruno, another attorney for the family, said it was not immediately known how fast the ball was traveling when Bryson was struck. While event tickets often include a liability disclaimer, Bruno said he did not believe that would apply to an availability before the game that the team encouraged fans to attend.
"This is not about putting kids in a bubble or ensuring the safety of everybody that comes to the ballpark," Bruno said. "This is about taking common sense measures and protecting the most vulnerable that we have from known dangers."
Middleton, who is not a target of this lawsuit, left the Angels as a free agent after the 2020 season when the club declined to offer him a new contract. He is pitching in the Arizona Diamondbacks' minor league system.
After the incident, Middleton went over to check on a crying Bryson and the team called for help. An Angels official followed up with an email but when the family requested help with medical bills no one replied, Scott said.
The lawsuit seeks unspecified damages and coverage of medical costs and loss of future earnings.
source: https://www.cbsnews.com/news/boy-brain-damaged-throw-los-angeles-angels-player-2019-lawsuit/