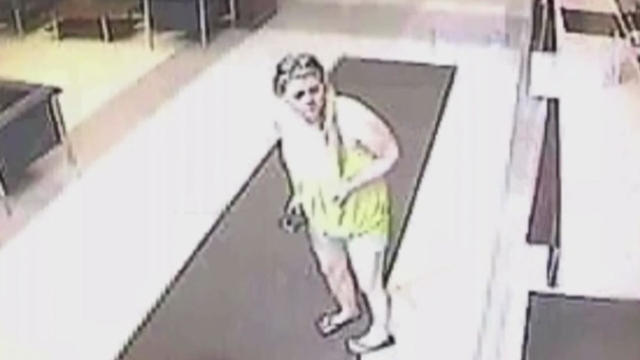 Twelve years after the first of 11 sets of human remains were found on a Long Island stretch of beach, police for the first time Tuesday released video of one of the victims before she was killed, CBS New York reports. Officials also announced they are doubling the reward to $50,000 in the Gilgo Beach murders case.
"We are making real progress," Suffolk County Police Commissioner Rodney Harrison said.
Suffolk's new police commissioner said he is bringing transparency and, he hopes, new leads in a notorious crime spree that's stumped police for a dozen years.
He released video never seen by the public of a lobby of the Holiday Inn Express in Hauppauge on June 4 and 6 in 2010. Seen in a yellow top is Megan Waterman in her final hours.
"We believe she did leave the hotel that night to meet her killer," Harrison said. "We hope that anyone who may have been in the area that night or many have seen any of the individuals depicted in these videos will reach out to our Crime Stoppers hotline [800-220-TIPS]."
Police say they hope to jog memories and they're doubling the reward for information to $50,000 for information that leads to an arrest and conviction.
Waterman was one of six sex workers killed, found along with the remains of five other people.
Videos appear on a revamped GilgoNews.com website, a renewed effort by a task force that includes talking to sex trafficking victims in jail.
"Gain their trust and ultimately get them to tell us who is responsible, in their opinion, for these heinous crimes," Suffolk County Undersheriff Kevin Catalina said.
The bodies were all found due to the initial search for missing woman Shannan Gilbert. Her sister is not overly hopeful.
"You're releasing things that you could have released from the very beginning," Sherre Gilbert told CBS New York. "It really doesn't make sense that they are releasing these little bits and pieces of evidence, but none of it, to me, is really, like, helpful."
"I think more should be coming right away," said John Ray, the attorney for the family of Shannan Gilbert.
Ray has been pressing police to publicly release much more, including Gilbert's 911 call, which he has heard.
"This is the first step, but it's a very small baby step towards what should be done, which is to bring the public into this case. It's the only way this will be solved," he said.
Suffolk's new police commissioner says he's still evaluating whether releasing the 911 tape will help or hinder the investigation. Shannan's sister and attorney say it's more than a decade overdue.
source: https://www.cbsnews.com/news/gilgo-beach-murder-victim-video-megan-waterman-long-island-serial-killer/