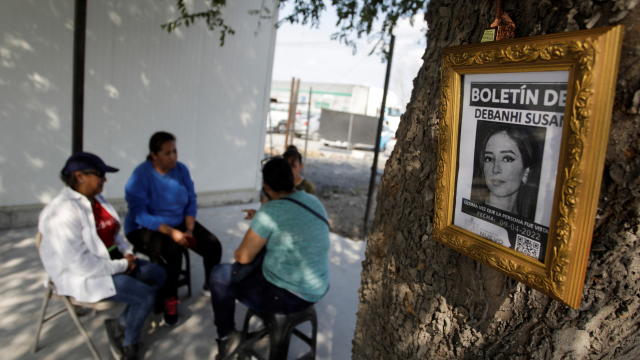 Twenty-six women and girls have disappeared so far this year in a northern Mexican state bordering Texas and five others who were reported missing have been found dead, the state governor said Tuesday. Authorities and families in Nuevo Leon are frantically searching for the missing, Reuters reported, as Mexico continues to grapple with pervasive gender violence.
Nuevo Leon Governor Samuel Garcia told a news conference that authorities and families were searching for the missing people, saying he would increase funding and resources to help combat gender violence, Reuters reported.
"We are working very hard to address the causes of this problem and I will be very clear: to the rapists, and those who commit femicide, and all those who hurt the women of Nuevo Leon, know that we will find them and punish them to the fullest extent of the law," Garcia said in a Facebook post.
Garcia also announced the appointment of Eusebia González González, a veteran lawyer who worked in a federal agency that handled crimes against women,  to formally tackle the crisis of gender violence.
She has "the best profile to fulfill this difficult task," Garcia said.
Among the more than two dozen missing in Nuevo Leon is Debanhi Escobar, an 18-year-old law student who vanished on April 9, Reuters reported. A few weeks before her disappearance, Escobar was among thousands of women who attended demonstrations against gender violence.
"She went to the feminist marches because she always wanted to help people," Debanhi's father, Mario Escobar, told Reuters. "We hope this will be a watershed moment, so no more girls, no more women go missing."
Debanhi's family joined police officers with search dogs this week in the hopes of finding their daughter alive, Reuters reported, while women handed out fliers offering a reward for information about the teenager's whereabouts.
Maria Rodriguez, who has a 20-year-old daughter, told Reuters she had been volunteering in the search for Escobar.  "She could be my daughter," she said.
Mexico reported 155 femicides - the killing of women because of their gender - in the first two months of this year, Reuters reported, citing federal crime statistics.
The number of people listed as missing in Mexico stands at nearly 99,000, according to a national register. Nearly 25,000 of them are women.
Last week, a United Nations committee urged Mexico to tackle widespread impunity in cases of enforced disappearance.
The U.N. Committee on Enforced Disappearances said that "organized crime has become a central perpetrator of disappearance in Mexico, with varying degrees of participation, acquiescence or omission by public servants."
It urged Mexico to act immediately to address an "alarming trend of rising enforced disappearances" facilitated by "almost absolute impunity," a U.N. statement said, noting that fewer than six percent of cases had resulted in prosecutions.
While men between 15 and 40 years old are most affected, disappearances of boys and girls from the age of 12, as well as of adolescents and women, are increasing, the committee said.
Mexican President Andres Manuel Lopez Obrador rejected the criticism.
"No international organization is going to put us in the dock if we are acting legally, humanely -- if we do not allow corruption or impunity," Lopez Obrador told reporters.
Disappearances began during the Mexican authorities' so-called dirty war against the revolutionary movements of the 1960s-1980s.
The number of people missing began to soar in the 2000s with increasing drug-related violence, particularly after then-president Felipe Calderon launched a military offensive against the cartels in 2006.
source: https://www.cbsnews.com/news/mexico-26-women-girls-missing-5-dead-nuevo-leon/