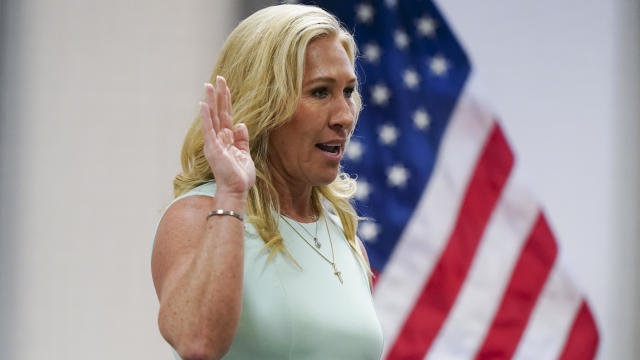 Washington — In mid-January 2021, just days before President Joe Biden's inauguration, Republican Rep. Marjorie Taylor Greene, of Georgia, texted then-White House chief of staff Mark Meadows to tell him some GOP members of Congress had privately suggested former President Trump should declare martial law, according to texts obtained by CBS News. Greene testified last week she does not recall whether she encouraged the president to impose martial law.
"In our private chat with only Members, several are saying the only way to save our Republic is for Trump to call for Marshall law," Greene wrote to Meadows on January 17, 2021. "I don't know on those things. I just wanted you to tell him. They stole this election. We all know. They will destroy our country next. Please tell him to declassify as much as possible so we can go after Biden and anyone else!"
That is one of multiple texts Greene sent to Meadows in the post-election period, around January 6, 2021. Greene also told Meadows "we think" the people who assaulted the Capitol on January 6 "are Antifa" dressed like Trump supporters. Meadows turned over his text messages to the January 6 committee probing the assault and then declined to cooperate further with the committee.
CNN first reported the texts, along with more than 2,000 texts Meadows exchanged with top aides, television personalities, members of Congress, and GOP activists.
It is unclear from the records whether Meadows responded.
Greene, who is fighting a challenge by constituents to block her from appearing on the Georgia ballot, testified in an administrative hearing Friday that she doesn't remember whether she encouraged the president to impose martial law as a way to remain in power.
"I don't recall," Greene told the court Friday.
Greene texted Meadows during the assault, too. "Mark I was just told there is an active shooter on the first floor of the Capitol Please tell the President to calm people This isn't the way to solve anything," she wrote on January 6, 2021.
On January 7, the day after the assault on the Capitol, Greene texted Meadows that "we tried everything we could in our objection to the 6 states," and she blamed anarchists for the melee at the Capitol, though she offered no evidence to back up her accusation.
"I'm sorry nothing worked," she continued. "I don't think that President Trump caused the attack on the Capitol. It's not his fault. Antifa was mixed in the crowed and instigated it, and safely people followed. But when people try everything and no one listens and nothing works, I guess they think they have no other choice. Absolutely no excuse and I fully denounce all of it, but after shut downs all year and a stolen election, people are saying that they have no other choice. I defended Trump last night on Newsmax. He has been the greatest President. I will continue to defend him. And if anyone attacks you. I hope you are ok. I feel badly for everyone."
"Thanks Marjorie," Meadows responded.
Greene also texted Meadows ahead of January 6, on December 31, 2020, although it's not clear from the records whether Meadows responded.
"Good morning, Mark, I'm here in DC," Greene wrote on December 31. We have to get organized for the 6th. I would like to meet with Rudy Giuliani again. We didn't get to speak with him long. Also anyone who can help. We are getting a lot of members on board. And we need to lay out the best case for each state."
Meadows provided the texts to the panel himself, and Rep. Adam Kinzinger, a Republican of Illinois, told "Face the Nation" last month he is "not confident that Meadows has handed over everything at all."
"He was cooperating with us for a little bit, and then, in an attempt to make Donald Trump happy, he stops cooperating," Kinzinger said. "We gave him plenty of space to come back and resume that. He has not."
Kathryn Watson contributed to this report.
Robert Costa is CBS News' chief election and campaign correspondent based in Washington, D.C.
source: https://www.cbsnews.com/news/marjorie-taylor-greene-texted-meadows-martial-law/