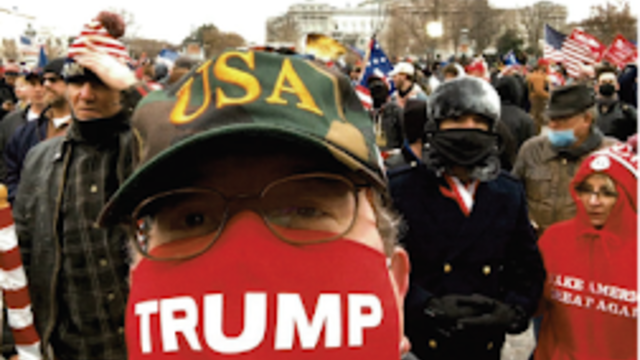 A judge on Wednesday found Matthew Martin of Santa Fe, New Mexico, not guilty of multiple misdemeanor counts related to the January 6, 2021, attack on the U.S. Capitol. Martin is the first person charged in connection to the January 6 attack who has been acquitted on all charges.
Martin, the first January 6 defendant to take the stand in his own defense, admitted to being inside the Capitol on January 6. He testified before Judge Trevor McFadden that after briefly attending former President Trump's rally, he went back to his hotel. He then returned to the Capitol for what he thought would be another rally and said he was "let in" by police, claiming he didn't notice any security barrier.
Martin testified that he entered the Capitol building, made his way through the Rotunda, and left. Martin's movements on January 6 were documented using CCTV footage from inside the Capitol and data, including video, from his own cell phone. Martin was not charged in connection with any of the violence seen on January 6 and was not found to be a member of any extremist groups.
Martin testified that when he returned to his hotel a second time, he exchanged text messages with his then-supervisor from work, stating: "It was beautiful. I will remember today for the rest of my life."
Martin did not tell his boss about his entry into the Capitol because, he said, she would disagree with his decision and he didn't want her to read too far into his messages. He did, however, text her "not as much security as you'd think" and "they were not prepared."
During cross examination, Martin called January 6 a "magical" day because of the spirit he saw in the streets and the many Trump supporters he encountered.
Martin also testified that after viewing Trump's December 12, 2020, tweet indicating the January 6 rally was going to be "wild," he booked his travel to Washington, D.C. "to support Trump and Mike Pence." He traveled alone.
In his ruling, McFadden cited Martin's demeanor while inside the Capitol, noting that he did not appear to be screaming or crowding anybody. McFadden also referenced video indicating police didn't physically block Martin as he entered the building, and one even appeared to possibly be waving him inside. McFadden said it was a "close call" on the charge of entering a restricted building. McFadden agreed that Martin entered the Capitol, but said in his ruling that intent was key.
Martin was formerly a senior engineer who held a national security clearance from the Department of Energy for private sector work. He told CBS News after the verdict that he was grateful and he hoped he would get his job back.
source: https://www.cbsnews.com/news/matthew-martin-january-6-defendant-not-guilty/