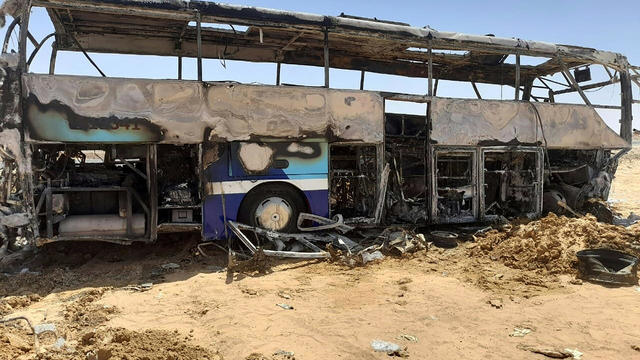 A tourist bus collided with a truck on a highway in southern Egypt and burst into flames on Wednesday, killing at least 10 people including four French and a Belgian, authorities said. The crash happened some 34 miles south of the ancient city of Luxor, as it was travelling to the temples of Esna on the west bank of the Nile River, provincial authorities said in a statement.
Along with the tourists, five Egyptians were killed in the crash. At least 14 others were injured, including eight from France and six from Belgium, they said.
They had "broken bones, bruises and superficial injuries" but all were in a stable condition, the governor of the southern province of Aswan said, AFP reported.
The cause of the crash was not immediately clear.
Footage that circulated online showed a tourist bus in flames with people trying to put out the fire. "A guest is dying inside," one person was heard screaming.
The bus in the video bore the logo of state-owned Misr Travel. The Cairo-based agency did not respond to a request for comment.
Aswan Provincial Governor Ashraf Attia said the injured were taken to hospitals and were in stable condition.
Wednesday's accident came five days after a bus crashed on a highway near the Red Sea, killing three including two Polish tourists.
Deadly traffic accidents claim thousands of lives every year in Egypt, which has a poor transportation safety record. The crashes and collisions are mostly caused by speeding, bad roads or poor enforcement of traffic laws.
Egypt's official statistics agency says there were around 10,000 road accidents in 2019, the most recent year for which statistics are available, leaving over 3,480 dead. In 2018, there were 8,480 car accidents, causing over 3,080 deaths.
Egypt had begun reviving its vital tourism industry by promoting its ancient heritage, after the country's 2011 revolution and ensuing unrest struck the sector.
But the arrival of the COVID pandemic in 2020 and the subsequent global travel bans resulted in a plunge in tourism revenues to $4 billion, from $13 billion the previous year.
The sector employs some two million people in a country of 103 million and generates more than 10 percent of GDP.
In August 2021, Russia resumed flights to Egyptian resorts six years after a Russian airliner crashed after taking off from Sharm el-Sheikh, killing all 224 people on board.
But Russia's invasion of Ukraine has yet again cut off much of the flow of tourists to Egypt, as the two countries accounted for about 40 percent of visitors prior to the war.
The current administration of President Abdel Fattah al-Sisi has invested heavily in promoting tourism, having organized major events in a bid to attract visitors.
Last April, the North African country staged a procession of floats carrying the mummified remains of 22 pharaohs, including Egypt's most powerful ancient queen, to a new resting place in Cairo.
And in November, the Egyptian Ministry of Tourism and Antiquities held a grand ceremony to mark the reopening of the ancient Avenue of Sphinxes in the city of Luxor.
Since last year, visitors from dozens of additional countries have been permitted to obtain visas on arrival to Egypt, than applying in advance.
While attacks on tourists have largely ceased since they peaked in the 1990s, deadly incidents have occurred.
In September 2015, eight Mexicans were mistakenly killed by security forces in the vast Western Desert.
And in February 2019, a German woman and two Egyptian children were killed when a building collapsed in a residential neighborhood of the southern city of Luxor.
AFP contributed to this report.
source: https://www.cbsnews.com/news/egypt-tourist-bus-crash-10-killed/