A new device aimed to make a Nelson beach more accessible will debut this Easter. 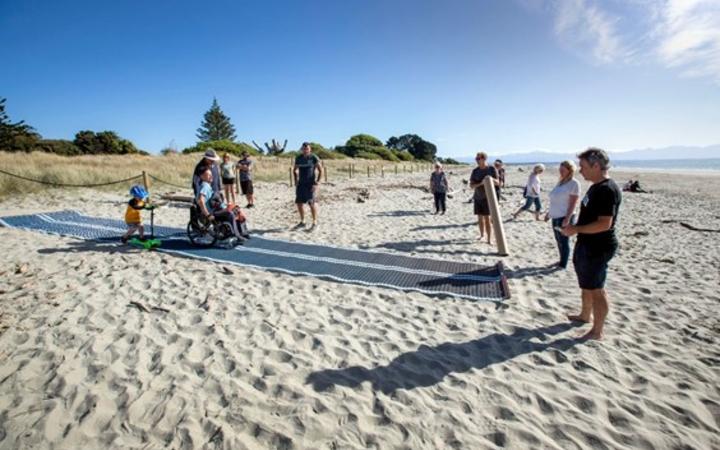 The Mobi-Mat helps wheelchair users and those with strollers and walkers to traverse the soft sand and get closer to the water at Tāhunanui Beach.

Caleb Harcus and his son, Ethan, trialled the new Mobi-Mat earlier this week with Harcus saying the mat would allow him to spend time playing with his son at the beach.

"It's great for me because, rather than waving from a distance, over there on Rocks Road, I'll be down in the action, that's the main thing for me.

The Mobi-Mat has been funded by Nelson Host Lions Club with support from the Nelson City Council, and was made from recycled materials.

It would be stored and rolled out by Moana Paddle Nelson on calm, sunny days when they were operating at the beach - weather permitting, it would be rolled out this Easter weekend.

The council's community and recreation chair, Tim Skinner, was thrilled to see the Mobi-Mat rolled out for the first time.

"As well as people who use wheelchairs and parents with strollers, the Mobi-Mat is a great way for anyone who has a mobility issue to get on to the beach.

"I can only imagine how frustrating it must have been for Caleb before now, and I am so pleased that he can now play on the beach with Ethan like any parent would expect."

The council would update the Antenno App and its social media feeds to let people know when the Mobi-Mat was in operation during winter, and when it could not be rolled out in summer.