Red zone land occupied by protesters: 'We're hoping we can get a quick resolution'

The Christchurch City Council says it is meeting daily with a group of people opposed to vaccine mandates who have set up camp in earthquake-damaged red zone land in the city. 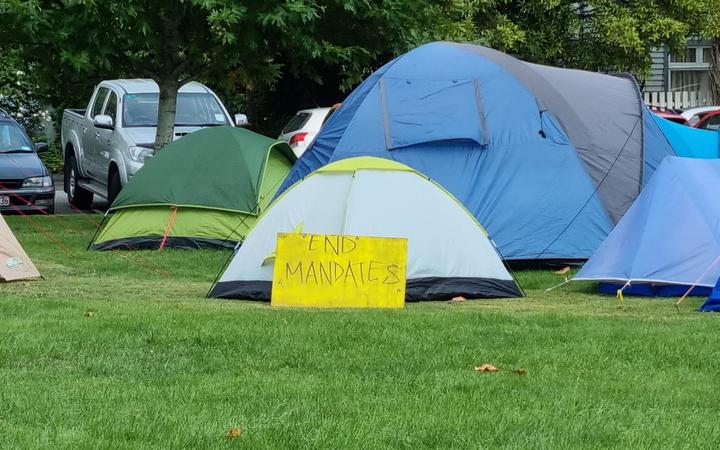 A similar themed occupation to the Burwood one occurred in Cranmer Square in Christchurch during February and March. Photo: RNZ / Niva Chittock

The council's head of parks, Andrew Rutledge, said they have been aware the group were staying on land near Brooker Ave, Burwood, since 1 April.

Rutledge said the council was working with police, Fire and Emergency and relevant social service agencies to ensure the safety of the people camping, local residents and people who use the area.

He said there had been a number of complaints from the local community about the presence of the group, and some of their behaviour.

"We are talking daily with the group occupying the land and we're hoping we can get a quick resolution," Rutledge said.

"However, this is a very difficult situation as the land is owned by Land Information New Zealand but managed by the council."

The council said it had to determine if earthquake-damaged red zone land is considered a park, and therefore subject to the council's 2016 Parks and Reserves Act.

"In the meantime, for health and safety reasons, we are bringing a rubbish skip and portaloos into the area so the group staying there can keep the site tidy and hygienic," Rutledge said.

Dozens of anti-mandate protesters illegally occupied Cranmer Square in central Christchurch for several weeks during February and March before vacating the site on 9 March.