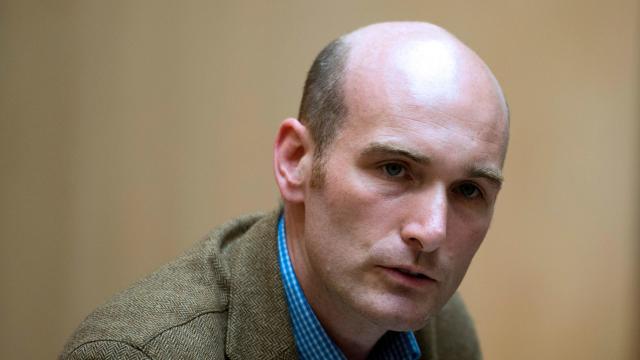 A French journalist held by ISIS testified Wednesday that he and other hostages were forced by their captors to sing a depraved parody of the Eagles song "Hotel California" called "Hotel Osama."
"It was terrifying for us, a joke for them," Nicolas Henin said at the Arlington, Virginia trial of El Shafee Elsheikh, a 33-year-old former British national.
Elsheikh is accused of involvement in the murders of American journalists James Foley and Steven Sotloff and aid workers Kayla Mueller and Peter Kassig.
Henin is one of several former hostages who have testified at the trial in federal court of the alleged member of the notorious ISIS kidnap-and-murder cell known as the "Beatles."
Henin said the words to "Hotel Osama" included the original lyrics from "Hotel California" about checking in but never leaving, but with a twist.
"If you try, you'll die Mr. Bigley style," the lyrics went, a reference to British engineer Kenneth Bigley, who was beheaded in 2004 by Jordanian Abu Musab Zarqawi, head of the al Qaeda terror network in Iraq.
Henin said he was captured in June 2013 on his fifth reporting trip to Syria.
He was held alone for two days in a bathroom but managed to escape by breaking bars on the windows with a broom.
After running the whole night, he arrived at a village at dawn and spoke to two men in pajamas.
"Unfortunately they were ISIS fighters," he said.
Returned to captivity, he was beaten and taken outside and "hung in the air for a couple of hours" with his hands and feet chained together.
Henin was later placed with other hostages including Frenchman Pierre Torres and Danish photographer Daniel Rye Ottenson.
British aid worker David Haines and Italian relief worker Federico Motka arrived later.
After being taken to another prison, three guards arrived one day speaking with British accents.
Haines and Motka told the other hostages they were the "Beatles," Henin said, using the nickname given to the jihadist jailers because of their British accents.
"They were terrified," he said of Haines and Motka. "Shaking."
They were later joined by Sotloff, Foley, John Cantlie, a British journalist captured with Foley, Toni Neukirch, a German citizen, and five Doctors Without Borders (MSF) workers.
He said the Beatles would come around once or twice a week, "sometimes for a round of beatings."
After his release in April 2014, Henin provided the authorities with information that was used in a rescue attempt.
"I spent a long time with agencies, describing the location, giving details to the person in charge of preparing the raid," Henin said.
The U.S.-led rescue mission was launched on July 4, 2014 but the hostages had been taken elsewhere just days earlier.
"They had been moved prior to the operation," said Robert Daniel Story, an FBI special agent who was involved in preparations for the raid and took the witness stand after Henin.
"We were very disappointed," Story said.
The "Beatles" held at least 27 foreign hostages in Syria between 2012 and 2015.
A number of European journalists and aid workers were released after ransoms were paid but the Americans -- Foley, Sotloff and Kassig -- were killed and videos of their murders released by IS for propaganda purposes.
Kassig's father read the letter his son wrote in 2014 from the witness stand.
"Dad, I'm paralyzed here. I'm afraid to fight back. Part of me still has hope. Part of me is sure I'm going to die," he wrote to his father, Ed Kassig.
The long, handwritten letter was delivered to his family by a released hostage.
"Don't worry Dad, if I do go down I won't go thinking anything but what I know to be true, that you and Mom love me more than the moon!" Peter Kassig wrote.
Kayla Mueller was reportedly handed over to ISIS leader Abu Bakr al-Baghdadi, who allegedly raped her repeatedly before killing her.
Elsheikh and another former British national, Alexanda Amon Kotey, were captured in January 2018 by a Kurdish militia in Syria.
They were turned over to U.S. forces in Iraq and flown to Virginia in 2020 to face charges of hostage-taking, conspiracy to murder U.S. citizens and supporting a foreign terrorist organization.
Kotey pleaded guilty in September 2021 and is facing life in prison.
"Beatles" executioner Mohamed Emwazi was killed by a U.S. drone in Syria in 2015, while the fourth member of the cell, Aine Davis, is imprisoned in Turkey after being convicted of terrorism.
Elsheikh has denied the charges, and his lawyers claim his arrest is a case of mistaken identity.
The Associated Press contributed reporting.
source: https://www.cbsnews.com/news/isis-hostage-testifies-beatles-trial-hotel-osama/