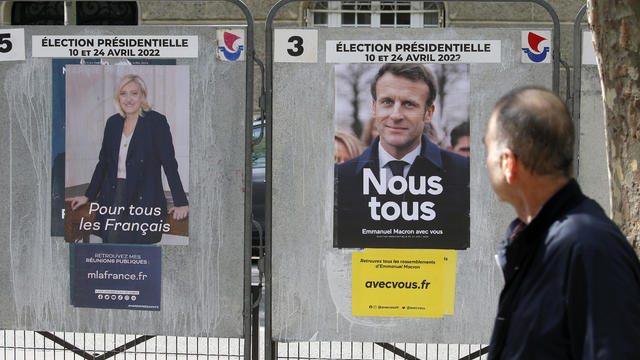 Voters in France are heading to the polls Sunday for the second and final round runoff to decide who will be the country's next president. The latest opinion polls suggest incumbent president Emmanuel Macron has a six- to 13-point lead over his rival, far-right leader Marine Le Pen.
Those polls changed little from before the two faced each other for the only candidates debate of the two-round race. They also suggest the race is still as tight as when pollsters asked the same question 10 months ago.
In an almost 3-hour long televised debate, the two candidates clashed over the cost of living, climate change, Europe, pension rights, the Muslim headscarf and Le Pen's alleged links to Russian Vladimir Putin.
Macron pulled no punches on that score: "You're dependent on Russia, you're dependent on Putin," he told her, reminding his opponent that she still has an outstanding loan with a Russian bank close to Putin.
Le Pen denied the charge, retorting: "I am a free woman," and "I am a patriot."
Polls just after the debate showed 59% of viewers believed Macron, who was combative throughout, was the most convincing, and just 39% found Le Pen, who was more subdued, performed well.
But with just three days left, the estimated 30% who haven't yet decided if they will vote on Sunday could make all the difference.
Macron needs the left and center-left voters who shunned him in the first round to get behind him now. He has the support of many of the 10 candidates defeated in the first round, although some preferred to urge their followers to "block Le Pen" rather than specify they should vote for Macron.
Younger voters have been dismayed at the swing to the right, as the traditional left and conservative parties were decimated in the first round. Many say Macron is unlikely to address their concerns about their future, although they don't believe Le Pen would either.
Le Pen, who ran an effective first round campaign concentrating on the issues many French people care about this time — the cost of living and job security — has been appealing to those who voted for the third-placed far-left candidate, Jean-Luc Melenchon. But he was clear in his post-defeat speech to them: "Not one single vote for Marine Le Pen."
The two were back on the campaign trail Thursday. Le Pen chose to go back to her support base, visiting the northern town of Roye. It's an area where she performed well in the first round, appealing as she did to voters who say they have trouble making ends meet.
Macron also went to Le Pen's support base, visiting the Parisian suburb of Saint-Denis, a gritty area with a high Muslim population and high unemployment. In the 1980s, it was a Communist stronghold, but by the end of the 1990s, it had swung to the far right. In the first round of this election, the area voted extreme, either right or left. Macron will be hoping those who voted far-left might be persuaded to rally behind him to block Le Pen.
source: https://www.cbsnews.com/news/french-presidential-election-2022-presidentielle-emmanuel-macron-marine-le-pen/