College pitcher "no longer on the team" after tackling baserunner 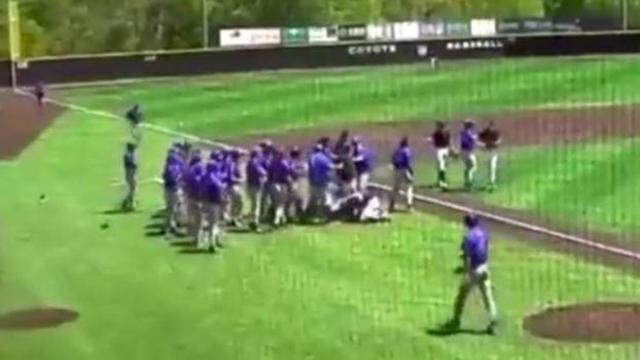 A junior college baseball pitcher in Texas is off the team after he tackled an opposing team's batter as he rounded the bases after hitting a home run, the coach said Thursday. Weatherford College head baseball coach Jeff Lightfoot said the player is "no longer on the team."
The incident sparked a brawl that was captured on video.
In a game between NCTC & Weatherford,
Josh Phillips hits a go ahead home run and the weatherford pitcher LEVELS him while he’s rounding the bases...
Only in Texas folks pic.twitter.com/Bb5lpQ4t34
Online video of the play showed North Central Texas College's Josh Phillips rounding third after his sixth-inning home run, only to have Weatherford College pitcher Owen Woodward charge off the mound and level him with a violent blow to the midsection. Several players then charged on to the field.
The North Texas Junior College Athletic Conference previously announced Thursday it suspended Woodward for four games, and Phillips also was suspended for two games because he was ejected for taunting.
Weatherford officials have said Woodward could face expulsion from school as the play caught widespread online attention.
Heading into the game, Woodward had a 3.10 ERA, 30 strikeouts and four saves over 20 1/3 innings pitched, CBSSports.com reported. He was a first-team All-District selection as a high school linebacker.
But the league office handed out most of its punishment for the North Central Texas program because of the players who ran onto the field after the hit.
The league suspended for two games "all team members for NCTC that were in the dugout or bullpen" and any assistant coaches who stepped onto the field. It also suspended four additional Weatherford players and assistant coaches for two games.
If that leaves North Central Texas without enough players for its next two games against Weatherford, it will have to forfeit, the league said. Both teams were ordered to forfeit the game that was stopped.
The teams are scheduled to play each other this weekend.
"We are shocked and disappointed at what happened in our game today," Lightfoot said after the game. "We do not condone this type of behavior. We have worked hard to build a program with the highest of standards. We are completely embarrassed by this incident, and we apologize to North Central Texas College and the fans of WC baseball. This type of behavior cannot be tolerated."
source: https://www.cbsnews.com/news/weatherford-college-pitcher-owen-woodward-off-team-tackling-baserunner-josh-phillips/