Judge holds Trump in contempt for failing to turn over documents 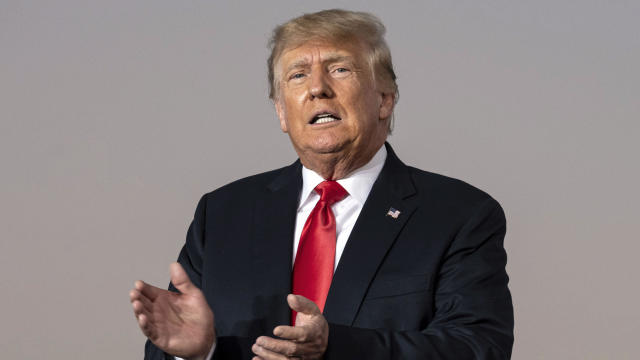 A New York judge on Monday held former President Donald Trump in contempt, and fined him $10,000 per day, for failing to comply with a subpoena requiring he turn over documents to investigators conducting a sprawling financial fraud probe for New York Attorney General Letitia James.
"Mr. Trump, I know you take your business seriously, and I take mine seriously, I hereby hold you in civil contempt and fine you $10,000 a day," said New York Supreme Court judge Arthur Engoron.
James' office asked for the contempt finding after Trump failed to meet a court-ordered March 31 deadline to turn over subpoenaed material, claiming he had none of the documents demanded in the civil probe.
"The March 31 deadline came and went and we received zero documents," Andrew Amer, an attorney for James' office, said in court Monday. Amer later asked, "Is Mr. Trump thumbing his nose at this court's order?"
Trump attorney Alina Habba said she personally oversaw the search for documents, including flying to Florida to interview Trump at his Mar-a-Lago club.
"There is simply nothing more for him to provide. It was already provided. So your honor, how is President Trump in contempt?" Habba asked.
But Engoron appeared to believe that explanation raised more questions about Trump's response to the subpoena, asking Habba why she didn't previously document the Mar-a-Lago interview.
"I feel like there's an 800-pound gorilla in the room, and that is, why don't we have an affidavit from him?" Engoron asked, later adding, "There is a difference between saying something and saying something under oath."
Investigators want information from three mobile devices belonging to Trump, two of which are personal and one of which is a company-issued phone, according to a filing James' office made Friday. Amer said Monday they have not received data from any of the devices.
They are also seeking documents from specific Trump Organization file storage locations, such as "the files located in cabinets outside Mr. Trump's office," "the storage room by Mr. Trump's office," "the Executive Office storage closet" and "the file cabinets located on the 25th and 26th floors."
In an at-times testy back and forth between Habba, Engoron, and his clerk Allison Greenfield, Engoron said Trump's attorneys failed to explain what they searched, and how.
"Let's say you're going to say, 'I searched the files outside his office.' I have to have an affidavit that says 'I searched the files outside his office,'" Engoron said.
Trump and two of his children, Donald Trump Jr. and Ivanka Trump, were ordered on February 17 to appear for depositions in James' long-running civil fraud probe. They appealed the order to appear, and are awaiting a decision on that appeal. Trump did not challenge a separate part of that February 17 ruling in which he was ordered to comply with James' subpoena for documents.
Engoron ordered Trump to comply by March 3, and later extended that deadline to March 31 — a date that was agreed to by both sides at the time, according to a court document.
James' office claimed in a February press release that its wide-ranging investigation has collected evidence "showing that Donald J. Trump and the Trump Organization used fraudulent and misleading financial statements to obtain economic benefit." The initial focus of the probe was on whether the Trump Organization inflated the valuations of assets while seeking loans and insurance coverage, and deflated their value to reduce tax liability.
Trump and his company have repeatedly denied all allegations of wrongdoing. Habba reiterated that Monday, calling the investigation "a political crusade."
The attorney general's office and the Trump Organization are nearing the end of their tolling agreement — which temporarily pauses some statutes of limitations during document production. An attorney general's office lawyer indicated that once the deadline passes it may lead to civil "enforcement" against the company.
"We will likely need to bring some sort of enforcement action in the near future to preserve our rights," said Kevin Wallace, of the attorney general's office.
That investigation, which on July 1, 2021 led to charges against the Trump Organization and its CFO, appears stalled.
Two leading prosecutors, Carey Dunne and Mark Pomerantz, resigned in February, less than two months after newly-elected Manhattan DA Alvin Bragg took office, succeeding Cyrus Vance Jr., who launched the investigation in August 2018. In Pomerantz's resignation letter, which was published in The New York Times, Pomerantz wrote that Vance "concluded that the facts warranted prosecution," but that Bragg had "reached the decision … not to seek criminal charges at the present time."
Bragg said in an April 7 statement that the criminal investigation "is continuing" and his investigators and prosecutors are "exploring evidence not previously explored."
Graham Kates is an investigative reporter covering criminal justice, privacy issues and information security for CBS News Digital. Contact Graham at [email protected] or [email protected]
source: https://www.cbsnews.com/news/trump-contempt-new-york-fraud-investigation-attorney-general-letitia-james/