European Commission chief Ursula von der Leyen said the civilian deaths in the Ukrainian town of Bucha showed the "cruel face" of Russia's army and pledged to try to speed Ukraine's bid to become a member of the European Union. 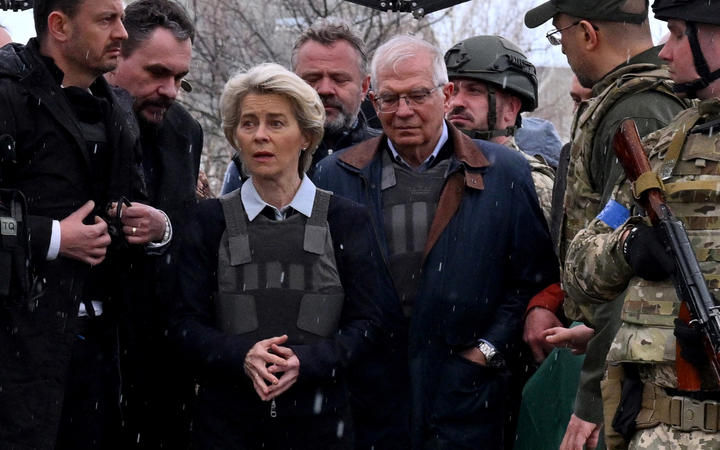 During a visit to Bucha, where forensic investigators started to exhume bodies from a mass grave, von der Leyen looked visibly moved by what she saw in the town northwest of Kyiv where Ukrainian officials say hundreds of civilians were killed by Russian forces.

Russia denies targeting civilians and has called the allegations that Russian forces executed civilians in Bucha while they occupied the town a "monstrous forgery" aimed at denigrating the Russian army.

As EU officials were about to arrive in Kyiv, at least 50 people were killed and many more wounded in a missile strike at a railway station packed with civilians fleeing the threat of a major Russian offensive in eastern Ukraine.

At a news conference, von der Leyen condemned what she called "the cynical behaviour" of those who wrote "for our children" on the weapons found near the scene.

The mayor of the town of Kramatorsk in the eastern region of Donetsk estimated that about 4000 people were gathered at the station at the time. Reuters was unable to verify what happened in Kramatorsk. 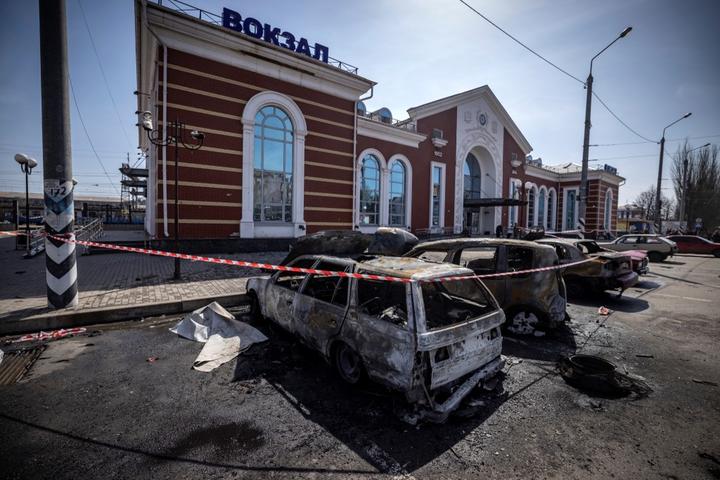 Calcinated cars are pictured outside the train station in Kramatorsk, eastern Ukraine, that was being used for civilian evacuations, after it was hit by a rocket attack killing at least 50 people. Photo: AFP

Saying the EU could never match the sacrifice of Ukraine, von der Leyen offered it a speedier start to its bid for bloc membership.

Handing President Volodymyr Zelenskiy a questionnaire which will form a starting point for a decision on membership, she said: "It will not as usual be a matter of years to form this opinion but I think a matter of weeks."

Zelenskiy told the same news conference he would come back with answers in a week.

"Russia will descend into economic, financial and technological decay, while Ukraine is marching towards the European future, this is what I see," von der Leyen said.

Earlier in Bucha, she told reporters that "the unthinkable has happened here".

The images from Bucha, which was retaken along with other towns north of the capital as Russian forces withdrew to focus efforts on the east of the country, have prompted a renewed effort by Western nations to punish Moscow for the 24 February invasion.

Von der Leyen's trip to Kyiv was aimed at offering Zelenskiy moral and some financial support.

She pledged her support for Ukraine to "emerge from the war as a democratic country", something, she said, the European Union and other donors would help with.

Josep Borrell, the EU's chief diplomat, said he hoped the EU could allocate a further 500 million euros ($US543 million) to Ukraine for arms purchases in a couple of days.

Zelenskiy says the war is a direct attack on not only Ukraine's existence, but the security of Europe as a whole.

Russia calls its action a "special military operation" to demilitarise and "denazify" its neighbour. Before the invasion, Putin had presented Ukraine's tilt in recent years to the West - including its aspiration to join NATO - as a threat to Russia's security.

Zelenskiy has urged Brussels to do more to punish Russia, including banning purchases of Russian oil and gas, and has called on the EU to accept Ukraine as a full member.

Earlier, Borrell said oil sanctions were "a big elephant in the room", with some concerns that a move to cut out Russian crude could cause a spike in prices that would be painful to European economies. He said a decision on exports would be raised on Monday in Brussels.