Kurt Cobain's "Smells Like Teen Spirit" guitar to be auctioned 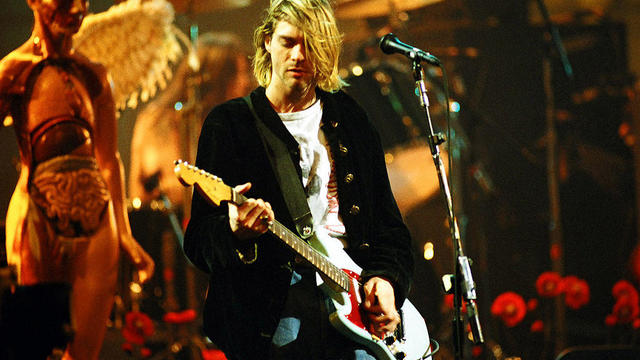 The iconic blue guitar played by late Nirvana frontman Kurt Cobain will be publicly auctioned for the first time in April. The Fender Mustang electric guitar made its debut in the music video for Nirvana's hit song "Smells Like Teen Spirit" and gained attention as the band's fame skyrocketed.
For the past 12 years, it has been on display at Seattle's Museum of Pop Culture. Now, it will be sold by Julien's Auctions, the auction house said in a statement. The 1969 Fender Mustang left-handed guitar in Competition Lake Placid blue finish is expected to sell for between $600,000 to $800,000. The three-day auction event, which also includes other items, will take place from May 20 to May 22.
"Julien's Auctions is proud to present the electric guitar that changed music and the world–one of the most important and iconic guitars owned and played by Kurt Cobain that will ever be sold at auction," the auction house said Monday.
Cobain died by suicide in 1994. Foo Fighters founder and former Nirvana member Dave Grohl told CBS News in 2018 that Cobain's death left him lost for a time.
"I went through a really dark period where I couldn't really even listen to the radio because it broke my heart just to hear music," he said.
The auction house said Monday that a portion of the guitar's proceeds will be donated to the program "Kicking The Stigma," a national initiative created by Indianapolis Colts owner Jim Irsay to "raise awareness about mental health disorders and to remove the stigma too often associated with these illnesses."
"Kurt Cobain was as great an artistic and cultural force as any performer in the last 30 years, and this auction celebrates his and Nirvana's indelible contributions to rock music and popular culture," Irsay said in the auction house's statement. "We are humbled and grateful that a portion of this auction's proceeds will benefit Kicking The Stigma and our efforts to bring the issue of mental health out of the darkness and into the light."
If you or someone you know is in emotional distress or suicidal crisis, call the National Suicide Prevention Hotline at 1-800-273-TALK (8255). For more information about mental health care resources and support, The National Alliance on Mental Illness (NAMI) HelpLine can be reached Monday through Friday, 10 a.m.-6 p.m. ET, at 1-800-950-NAMI (6264) or email [email protected]
source: https://www.cbsnews.com/news/kurt-cobain-nirvana-teen-spirit-guitar-auction/