The UK's defence ministry said that Russian forces were targeting civilians, a day after a missile attack on a train station crowded with women, children and the elderly killed at least 52 people, according to Ukrainian officials. 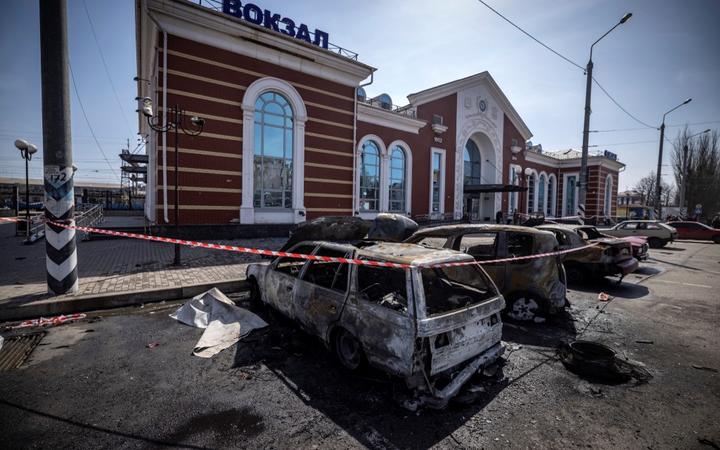 Thousands of civilians were at the train station in Kramatorsk when it was hit by Russian rockets. Photo: AFP

Russia was focusing its offensive, which included cruise missiles launched by its naval forces, on the eastern Donbas region, the British ministry said in a daily briefing.

It said it expected air attacks would increase in the south and east as Russia seeks to establish a land bridge between Crimea, which Moscow annexed in 2014, and the Donbas but Ukrainian forces were thwarting the advance.

"The occupiers continue to prepare for the offensive in the east of our country in order to establish full control over the territories of Donetsk and Luhansk regions," the General Staff of Ukraine's armed forces said.

President Volodymyr Zelensky called the strike on the train station in Kramatorsk, in the eastern region of Donetsk, a deliberate attack on civilians. The city's mayor estimated 4000 people were gathered there at the time.

Regional governor Pavlo Kyrylenko said the station was hit by a Tochka U short-range ballistic missile containing cluster munitions, which explode in mid-air, spraying bomblets over a wider area.

Reuters was unable to verify what happened in Kramatorsk.

Cluster munitions are banned under a 2008 convention. Russia has not signed it but has previously denied using such armaments in Ukraine.

"We expect a firm global response to this war crime," Zelensky said in a video posted late on Friday.

"Any delay in providing ... weapons to Ukraine, any refusals, can only mean the politicians in question want to help the Russian leadership more than us," he said, calling for an energy embargo and all Russian banks to be cut off from the global system.

Russia's more than six-week long incursion has seen more than 4 million people flee abroad; killed or injured thousands; left a quarter of the population homeless and turned cities into rubble as it drags on for longer than Russia expected.

In Washington, a senior defence official said the United States was "not buying the denial by the Russians that they weren't responsible", and believed Russian forces had fired a short-range ballistic missile in the train station attack.

US President Joe Biden called the strike "yet another horrific atrocity committed by Russia".

The Russian defence ministry was quoted by RIA news agency as saying the missiles said to have struck the station were used only by Ukraine's military and that Russia's armed forces had no targets assigned in Kramatorsk on Friday.

Russia has denied targeting civilians since President Vladimir Putin ordered the invasion on 24 February in what he called a "special military operation" to demilitarise and "denazify" Russia's southern neighbour.

Ukraine and its Western supporters call that a pretext for an unprovoked invasion.

The Kremlin said on Friday the "special operation" could end in the "foreseeable future" with its aims being achieved through work by the Russian military and peace negotiators.

NATO Secretary General Jens Stoltenberg has warned the war could last months or even years.

The White House said it would support attempts to investigate the attack in Kramatorsk, which Britain's Prime Minister Boris Johnson said showed "the depths to which Putin's vaunted army has sunk". 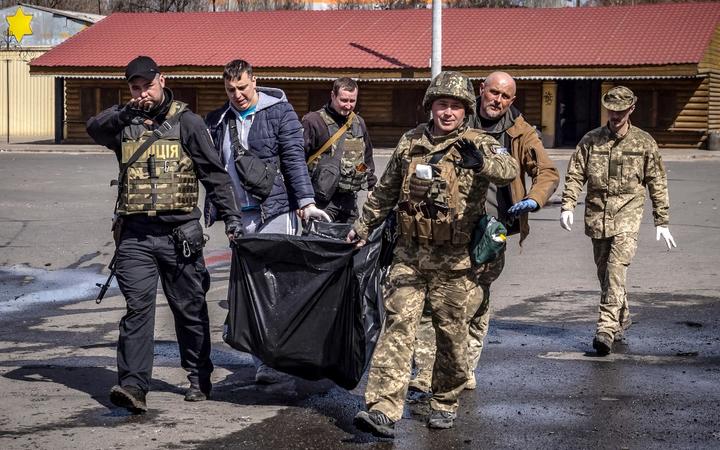 Ukrainian soldiers take away a body after the attack at the train station. Photo: AFP

Following a partial Russian pullback near Kyiv, a forensics team on Friday began exhuming a mass grave in the town of Bucha. Authorities say hundreds of dead civilians have been found there. 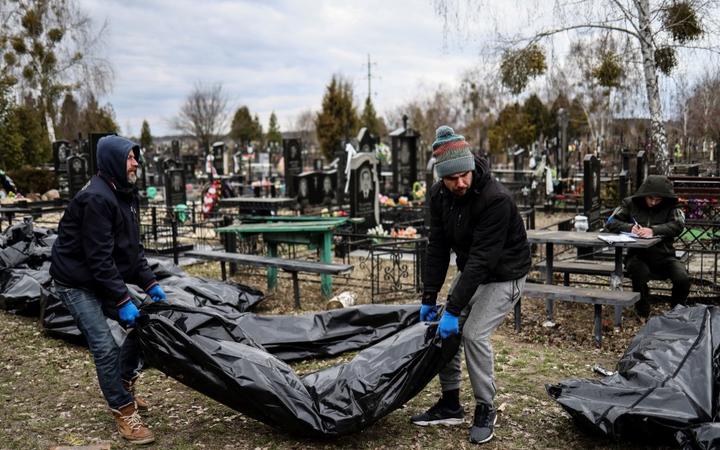 Workers line up bodies for identification by forensic personnel and police officers in the cemetery in Bucha. Photo: AFP

Russia has called allegations that its forces executed civilians in Bucha a "monstrous forgery" aimed at denigrating its army and justifying more sanctions.

Visiting the town on Friday, von der Leyen said it had witnessed the "unthinkable".

She later handed Zelensky a questionnaire forming a starting point for the EU to decide on membership, telling him: "It will not as usual be a matter of years to form this opinion but I think a matter of weeks." 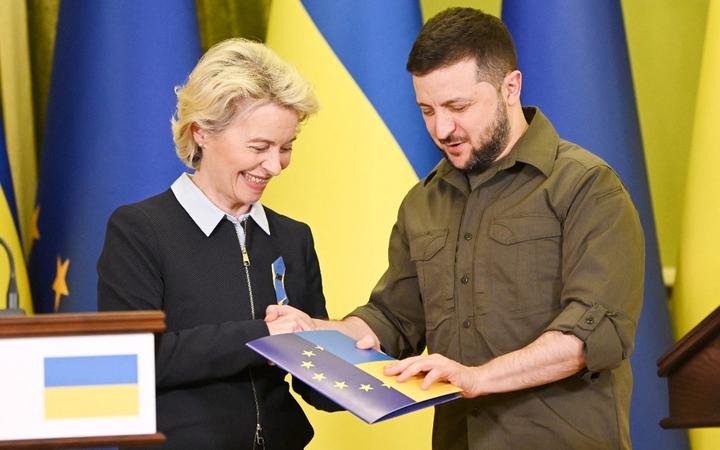 Austrian Chancellor Karl Nehammer is due to visit on Saturday for talks with Zelensky.

The bloc also overcame some divisions to adopt new sanctions, including bans on the import of coal, wood, chemicals and other products alongside the freezing of EU assets belonging to Putin's daughters and more oligarchs.

EU foreign policy chief Josep Borrell said the possibility of an oil ban would be discussed on Monday but called oil sanctions "a big elephant in the room" for a continent heavily reliant on Russian energy.

The planned corridors include one for people evacuating by private transport from the devastated southeastern city of Mariupol. 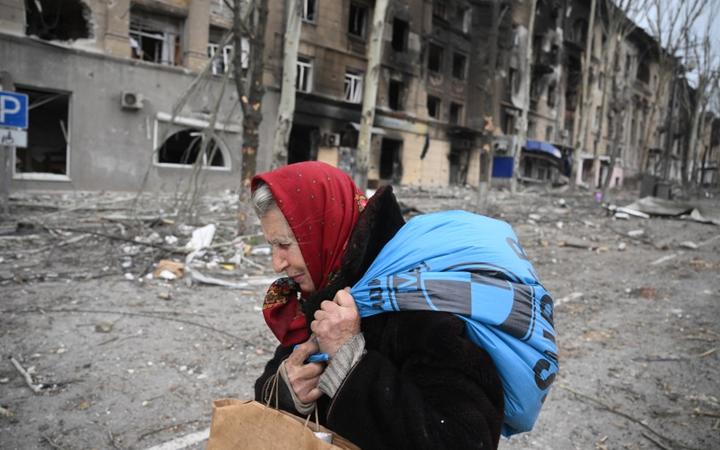 An elderly woman passes by a destroyed house in Mariupol. Photo: AFP

A Western official has confirmed Russia has reorganised the command of its operations in Ukraine, with the new general having had extensive experience in battle operations in Syria.

"That particular commander has a lot of experience of operations of Russian operations in Syria. So we would expect the overall command and control to improve," the source said.

The change was made in an attempt to improve coordination between various units, as Russian groups had previously been organised and commanded separately, the official said.

Russia has so far struggled to achieve its war aims 44 days into the invasion, failing to capture major cities such as Kyiv before eventually turning its sights to the Donbas region in the east.