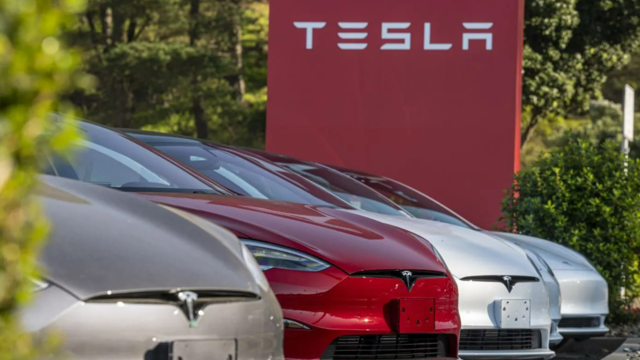 Tesla reported Wednesday that its first-quarter net earnings were over seven times greater than a year ago, powered by strong sales despite global supply-chain challenges and pandemic-related production cuts in China.
The electric vehicle and solar panel company made $3.32 billion from January through March. Revenue for the quarter was $18.76 billion, also beating estimates of $17.85 billion.
Tesla shares rose nearly 5% to $1,024 after posting its latest results.
"[W]ith the supply-chain issues still a lingering overhang on the auto space — and logistical issues globally, we believe these 'Cinderella-like' delivery numbers in a brutal supply-chain backdrop speaks to an [electric vehicle] demand trajectory that looks quite robust for Tesla heading into the rest of 2022," Wedbush Securities analyst Dan Ives said in a report.
Tesla's financial results were boosted by multiple price hikes for its vehicles meant to offset rising costs of lithium, nickel, cobalt and other precious metals used to make batteries. The company's Model X SUV now costs $114,900; the Model S costs $99,990; the Model 3 Performance costs $61,990; and Model Y costs $62,990.
It may be harder for Tesla to post similar numbers later this year. It's facing costs from ramping up new factories in Germany and Texas, as well as rising commodity prices. It's also looking at increased competition as startups and legacy automakers roll out more electric models.
The company said its weekly production for the quarter was strong, but a spike in COVID-19 cases brought the temporary shutdown of its factory in Shanghai, as well as part of Tesla's supply chain.
"Although limited production (at the Shanghai factory) has recently restarted, we continue to monitor the situation closely," the company said in a letter to investors.
CEO Elon Musk is expected to attend the company's earnings conference call later Wednesday. He also could be asked about his $43 billion hostile bid to take over Twitter.
Tesla delivered a record 310,000 vehicles worldwide in the first quarter, up roughly 68% from the same period in 2021. The increase came even as Tesla battled a global shortage of computer chips and other parts like the rest of the global auto industry. Tesla delivered 185,000 vehicles in the first quarter of last year.
Tesla seems to have dealt with parts shortages better than the rest of the industry.
Last year the company delivered a record 936,000 vehicles, an 87% increase over 2020 numbers. The company said in February that it expects 50% annual growth in sales, meaning it expects about 1.4 million vehicles to be delivered this year.
Earlier this month, the company celebrated the opening of its billion-dollar-plus "Gigafactory" in Texas, with a massive private event attended by 15,000 people and hosted by Musk. The new factory in Travis County also serves as the company's new home following its move from California.
source: https://www.cbsnews.com/news/tesla-earnings-electric-cars-2022/