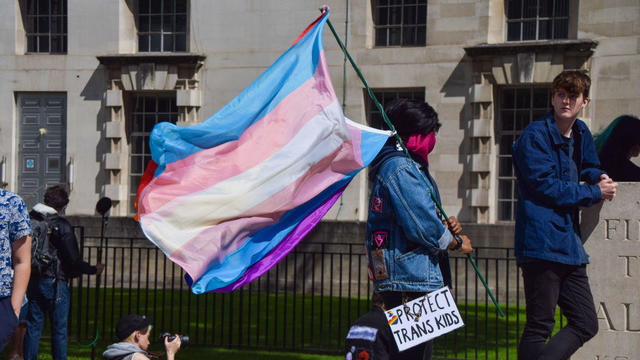 Republican Governor Kay Ivey signed sweeping legislation Friday that outlawed gender-affirming medications for transgender youth. Under the new law, doctors could face criminal penalties for prescribing puberty blockers or hormones to transgender youth under 19 years old.
"There are very real challenges facing our young people, especially with today's societal pressures and modern culture," Ivey said in a statement Friday. "I believe very strongly that if the Good Lord made you a boy, you are a boy, and if he made you a girl, you are a girl."
In addition to banning gender-affirming medications, the bill also prohibits gender transition surgeries, although doctors told lawmakers those are generally not done on minors. Violations are punishable by up to 10 years in prison.
LGBTQ+ activist and state director for the Human Rights Campaign, Carmarion D. Anderson-Harvey, said it was "the most anti-transgender legislative package ever passed."
"They have successfully criminalized critically important care that transgender youth need desperately, and the incredible doctors and care providers who help transgender youth each and every day," Anderson-Harvey wrote in a statement Friday. "In doing so they have jeopardized the future of these doctors, families, and transgender youth who are all considering what their livelihoods will be in Alabama."
Ivey signed the bill into law after the state's House of Representatives voted 66-28, largely along party lines, on Thursday. Rep. Neil Rafferty, the only openly gay member of the Alabama Legislature, appeared to struggle to maintain composure as lawmakers headed to the vote.
"This is wrong," Rafferty said. "Y'all sit there and campaign on family being the foundation of our nation ... but what this bill is doing is totally undermining that. It's totally undermining family rights, health rights and access to health care."
Also Friday, Ivey signed separate legislation related to public school bathrooms and discussions of gender and sexual identity in early grades into law, framing it as a way to keep classrooms "free from any kind of sex talk."
"We don't need to be teaching young children about sex," she said in a statement. "We are talking about five-year-olds for crying out loud. We need to focus on what matters – core instruction like reading and math."
Just a day before the governor signed the bill, state senators voted 26-5 to approve the legislation, which mandates that K-12 students can only use multiperson bathrooms and locker rooms that correspond with the gender on their original birth certificate, rather than their current gender identity. Republicans also added language similar to a law in Florida that critics called the "Don't Say Gay" measure.
The Alabama bill prohibits "classroom instruction or discussion on sexual orientation or gender identity" for students in kindergarten through the fifth grade. The Alabama proposal goes further than Florida's law, which includes grades K-3.
"Kids in kindergarten through fifth grade should not be introduced to sexual orientation and gender identity, and if they are it should could come from their parents," said Republican Rep. Scott Stadthagen of Hartselle.
Stadthagen said he introduced the bathroom bill after hearing of schools being threatened with lawsuits when they offered to let students use faculty bathrooms.
Rep. Napoleon Bracy, a Democrat from Prichard, called the sudden addition of the Florida-style language "totally political" as lawmakers head to primaries in May.
"We can't continue to just be bullying and targeting people because of who they are," Bracy said.
White House spokeswoman Jen Psaki told reporters Thursday that the U.S. Department of Justice has warned states such laws and policies may violate the Constitution and federal law.
source: https://www.cbsnews.com/news/alabama-governor-kay-ivey-signs-law-transgender-youth-healthcare-ban/