Russia has resumed its assault on the last Ukrainian defenders holed up in a giant steel works in Mariupol, days after Moscow declared victory in the southern city and said its forces did not need to take the plant. 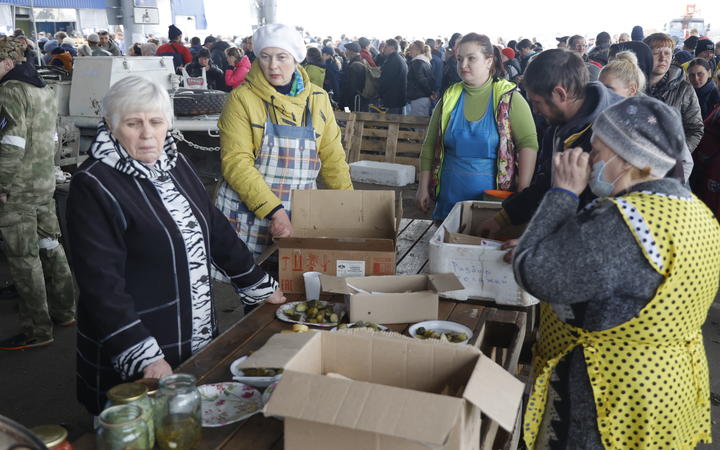 Ukrainian president Volodymyr Zelensky said the country's army was not ready to try to break through the siege of the port city by force. But he told an evening news conference that Kyiv had every right to do so.

The attack on Mariupol has raged for weeks as Russia seeks to capture a city seen as vital to its attempts to link the eastern Donbas region with Crimea, the Black Sea peninsula Moscow seized in 2014. It has been the biggest battle of the conflict so far.

Moscow-backed separatists have held territory in the Donbas region for years.

The death toll could not be independently verified. The last big strike on or near Odesa was in early April.

"The only aim of Russian missile strikes on Odesa is terror," Ukrainian Foreign Minister Dmytro Kuleba wrote on Twitter. Russia has denied targeting civilians in its "special military operation" that began on 24 February.

The Russian defence ministry said it used high-precision missiles on Saturday to destroy a logistics terminal in Odesa where a large number of weapons supplied by the United States and European nations were being stored.

It also said Russian forces had killed up to 200 Ukrainian troops and destroyed more than 30 vehicles on Saturday.

Kyiv and the West have called the invasion an unjustified war of aggression.

Russian forces have besieged and bombarded Mariupol since the early days of the war, leaving in ruins a city usually home to more than 400,000 people. A new attempt to evacuate civilians failed on Saturday, an aide to Mariupol's mayor said. 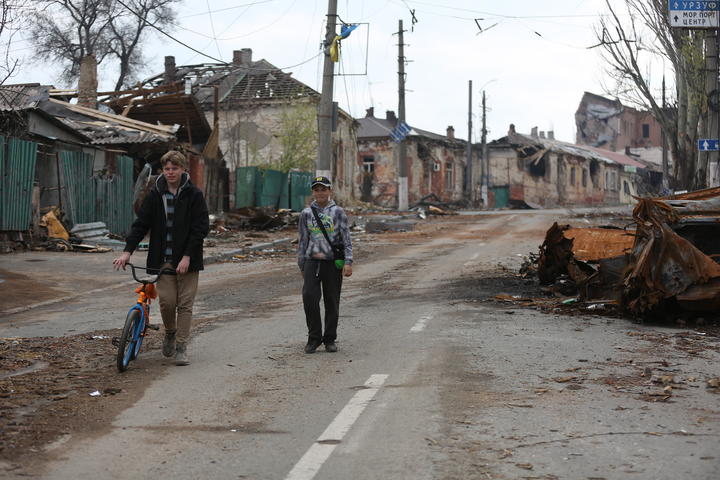 Children out on the Mariupol streets, amid the destruction, on Friday. Photo: AFP/ Anadolu Agency

Russia's defence ministry on Friday said Mariupol's last fighters had been "securely blockaded" at the steel plant. On Thursday, president Vladimir Putin had declared the city "liberated", declaring that troops would not storm Azovstal.

Oleksiy Arestovych, a political adviser to Zelensky, said Ukrainian troops in the steel complex were holding out and attempting counterattacks. More than 1000 civilians are also in the plant, according to Ukrainian authorities.

The Azov battalion, a nationalist militia prominent in the defence of Mariupol, released a video it said showed women and children sheltering in the complex. Reuters could not independently verify where or when the video was shot.

One woman holding a young child said food was running out, while an unnamed boy in the video said he was desperate to get out after two months in the bunker.

"I want to see the sun because in here it's dim, not like outside. When our houses are rebuilt we can live in peace. Let Ukraine win because Ukraine is our native home," he said. 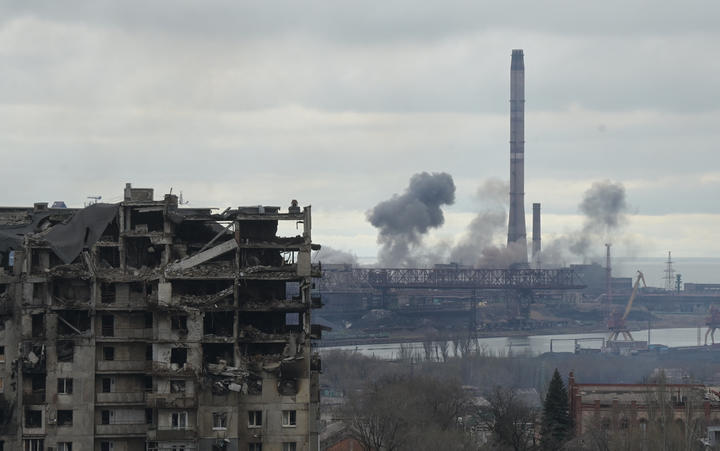 Ukraine has estimated tens of thousands of civilians have been killed in Mariupol and about 100,000 civilians are still there. The United Nations and Red Cross said the civilian toll was at least in the thousands.

Russia's current offensive is focused on the Donbas, which includes the Donetsk and Luhansk regions.

Serhiy Gaidai, the governor of Luhansk said on Saturday that Ukrainian forces were pulling back from some settlements to new defensive lines to preserve their units in the face of an intensifying barrage on all cities in the region.

Three people were killed and seven wounded by Russian shelling in the eastern region of Kharkiv on Saturday, the region's governor said.

The governor of a Russian border region said that Ukraine had shelled a crossing point on Russia's territory, causing a fire but no casualties. It was not immediately possible to confirm details of the incident or determine who was responsible.

Russia said it had shot down a Ukrainian fighter jet and destroyed three Ukrainian helicopters at an airfield in Kharkiv. There was no immediate comment from Ukraine on the Russian assertion.

The Ukrainian military said on Saturday it had destroyed 177 Russian aircraft and 154 helicopters since the start of the war. Reuters could not verify the figures.

Zelensky said Ukraine's allies were finally delivering weapons which Kyiv has asked for. The United States, Canada and Britain have all recently announced plans for new weapons deliveries.

The Ukrainian leader said he wants talks with Russia, but the likelihood they would happen is dependent on Putin.

He also announced a planned visit to Kyiv from top US diplomat and secretary of state Antony Blinken and US defence secretary Lloyd Austin, on Sunday.

The Ukrainian leader said he plans to discuss the types of weapons Ukraine needs to battle the Russian invasion and he expects concrete results.

US president Joe Biden's administration has not yet confirmed any travel plans for Blinken and Austin. The US State Department and the Pentagon declined to comment.