Ukraine says it is trying to break Russia's siege of Mariupol as fighting rages around the city's massive steel works and port, and the capital Kyiv was rocked by some of the most powerful explosions in two weeks. 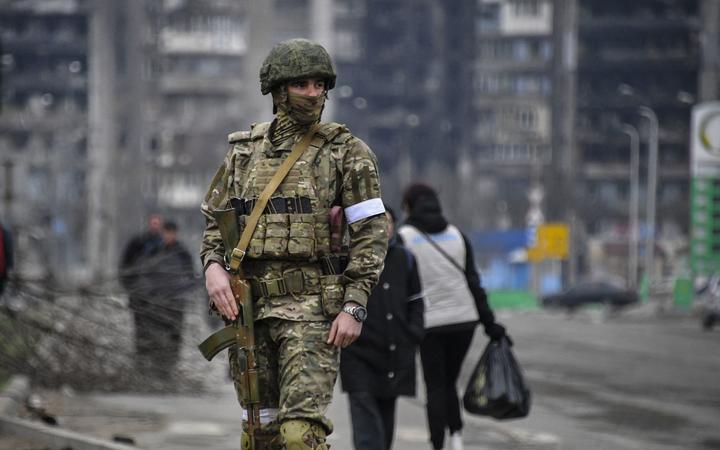 A Russian soldier patrols in a street of Mariupol on April 12, 2022, as Russian troops intensify a campaign to take the strategic port city. Photo: AFP

Ukrainian President Volodymyr Zelenskiy said the military situation in the south and east of the country was "still very difficult," while praising the work of his armed forces.

"The successes of our military on the battlefield are really significant, historically significant. But they are still not enough to clean our land of the occupiers. We will beat them some more," Zelenskiy said in a late-night video address, calling again for allies to send heavier weapons and for an international embargo on Russian oil.

Russia said it struck what it described as a factory on the outskirts of Kyiv that made and repaired anti-ship missiles, in apparent retaliation for yesterday's sinking of the Moskva, the flagship of Moscow's Black Sea fleet.

Ukraine said one of its missiles had caused the Moskva to sink, a powerful symbol of its resistance to a better-armed foe. Moscow said the ship sank while being towed in stormy seas after a fire caused by an explosion of ammunition.

The United States believes the Moskva was hit by two Ukrainian missiles and that there were Russian casualties, although numbers were unclear, a senior US official said.

Russia has said more than 500 sailors on board the Moskva were evacuated after the blast. Neither that assertion nor the US assessment could be independently verified. 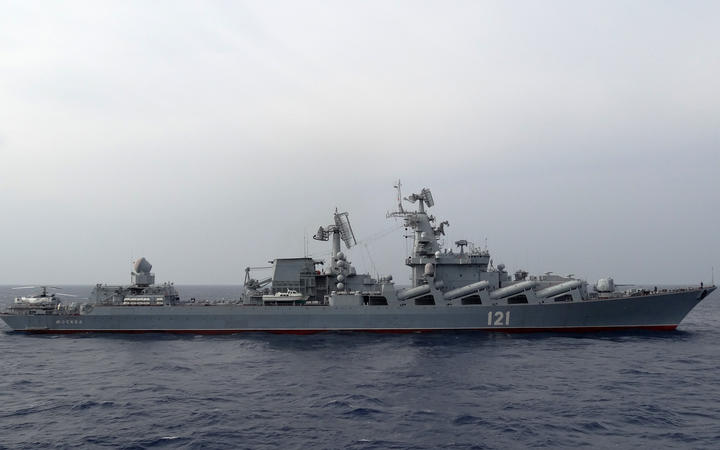 In this file photo taken on 17 December, 2015 the Russian missile cruiser Moskva patrols in the Mediterranean Sea, off the coast of Syria. Photo: AFP

Mariupol, on the Sea of Azov in southeastern Ukraine, has seen the worst fighting of the seven-week-long war.

Home to 400,000 people before Russia's invasion, the city has been reduced to rubble. Thousands of civilians have died and tens of thousands remain trapped in the city.

"The situation in Mariupol is difficult and hard. Fighting is happening right now. The Russian army is constantly calling on additional units to storm the city," defence ministry spokesperson Oleksandr Motuzyanyk told a televised briefing.

Although he said the Russians have not completely captured the city.

Motuzyanyk said Russia had used long-range bombers to attack Mariupol for the first time since its 24 February invasion.

In his address, Zelenskiy said Ukraine's allies have the power to make the war much shorter, by sending the weapons his government needs.

"I always tell all our partners ... that the amount of support for Ukraine directly affects the restoration of peace. It literally defines how many more Ukrainians the occupiers will manage to kill," he said. 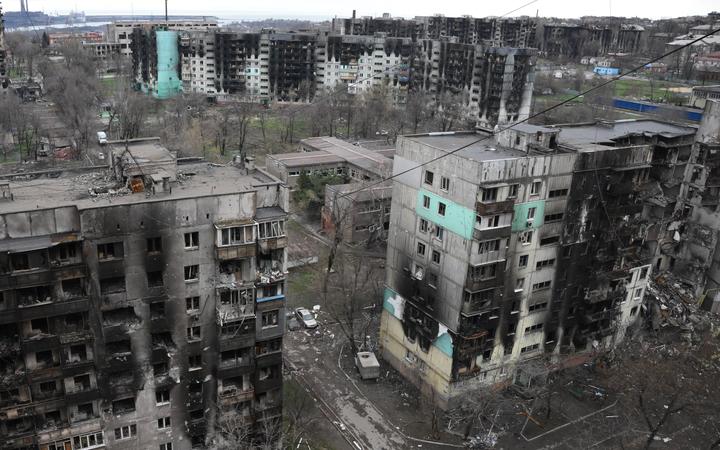 Residential buildings damaged by the shelling in Mariupol on 14 April, 2022. Photo: Ilya Pitalev / Sputnik via AFP

Moscow has said its main war aim is to capture the Donbas, an eastern region already partly held by Russian-backed separatists, after its invasion force was driven from the outskirts of Kyiv this month.

Ukrainian Deputy Prime Minister Iryna Vereshchuk said 2864 people were evacuated from conflict areas on Friday, including 363 people from Mariupol who used their own transport.

Zelenskiy recently made a direct appeal to US President Joe Biden for the United States to designate Russia a "state sponsor of terrorism," the Washington Post reported, citing people familiar with their conversation.

A White House spokesperson declined to respond specifically to the report, adding, "We will continue to consider all options to increase the pressure on Putin."

If Moscow captures Mariupol, it would be the only big city to fall to the Russians so far.

Russia's defence ministry said it had captured the city's Illich steel works. The report could not be confirmed.

Ukrainian defenders are mainly believed to be holding out in Azovstal, another huge steel works.

Both plants are owned by Metinvest - the empire of Ukraine's richest businessman and backbone of Ukraine's industrial east - which told Reuters it would never let its enterprises operate under Russian occupation. 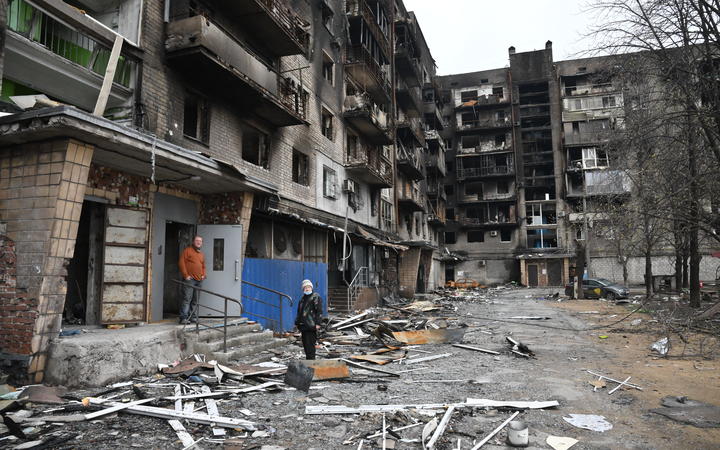 Residents stand outside a residential building damaged by the shelling in Mariupol on 14 April, 2022. Photo: Ilya Pitalev / Sputnik via AFP

The Moskva was by far Russia's largest vessel in the Black Sea fleet, equipped with guided missiles to shoot down planes and attack the shore. It had radar to provide air defence cover for the fleet.

Moscow has used its naval power to blockade Ukrainian ports and threaten a potential amphibious landing along the coast.

Without its flagship, the largest warship sunk during conflict since Argentina's General Belgrano in the 1982 Falklands war, its ability to menace Ukraine from the sea could be crippled.

Russia's Defence Ministry said its forces would step up strikes on Kyiv.

"The number and scale of missile strikes on targets in Kyiv will increase in response to any terrorist attacks or acts of sabotage on Russian territory committed by the Kyiv nationalist regime," the ministry said.

Kirill Kyrylo, 38, a worker at a car repair shop in the Ukrainian capital, said he had seen three impacts on an industrial building, causing a blaze that was put out by firefighters.

"The building was on fire and I had to hide behind my car," he said, pointing out the shattered glass of the repair shop and bits of metal that had flown from the burning building.

Russia initially described its aims in Ukraine as disarming its neighbour and defeating nationalists there.

Kyiv and its Western allies say those are bogus justifications for an unprovoked war of aggression that has driven a quarter of Ukraine's 44 million people from their homes and led to the deaths of thousands.