Pentagon training a small number of Ukrainians in the U.S. on new weapons 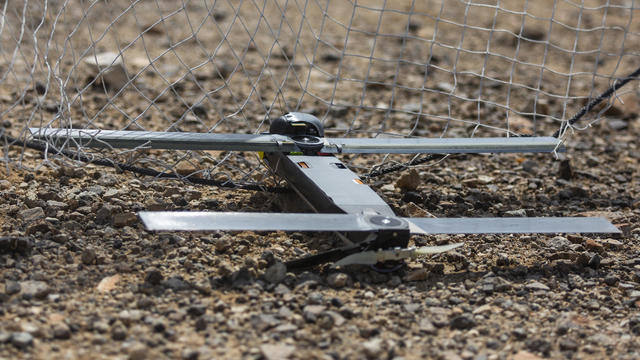 A small number of Ukrainians who have been in the U.S. since the fall in professional military education programs have received rudimentary training on weapons systems that are new to the Ukrainian military, Pentagon spokesperson John Kirby said in a press briefing Wednesday.
The U.S. has taken advantage of having a small number of Ukrainians in the country and pulled them aside for a couple of days to receive training on how to operate switchblade drones. Kirby said training on the drones only takes a couple of days.
The small number of individuals are expected to go back to Ukraine relatively soon, as was initially planned and can train additional Ukrainian soldiers on the weapons.
The $800 million in assistance President Biden approved in March included 100 switchblade drones. Kirby on Wednesday said that all 100 of those drones have shipped to the region and are on their way to Ukraine, if they're not in Ukraine already.
Defense Secretary Lloyd Austin and Chairman of the Joint Chiefs of Staff General Mark Milley told the House Armed Services Committee on Tuesday that the new equipment heading over to Ukraine does require some additional training and some of that training is occurring in the U.S.
There are two versions of the switchblade, one goes after personnel and another after armored vehicles, like tanks. Austin told the House committee on Tuesday that Ukraine will receive both versions.
Overall, the U.S. has committed $1.7 billion in security assistance to Ukraine since the invasion started. The U.S. has two coordination cells that are assisting in making sure the weapons the Ukrainians need from the U.S. and other allies get into the hands of the Ukrainian military.
Since Mr. Biden has said no U.S. troops will be sent into Ukraine, the U.S. is coordinating the shipments to go into Ukraine mostly by land. Kirby said Wednesday that on average, it takes between four to six days after an announcement of assistance for the first shipment to arrive in Ukraine, which is unprecedented speed, according to Kirby.
The Biden administration has announced an additional $100 million worth of Javelins will head to Ukraine. This announcement came as the Ukrainian military is expecting increased fighting in the east now that the Russian military has stated it is reprioritizing the Donbas region.
CBS News reporter covering the Pentagon.
source: https://www.cbsnews.com/news/ukrainians-in-america-training-weapons-pentagon/