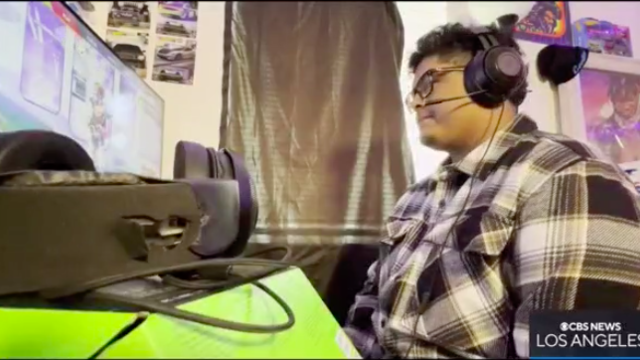 Jonathan Gonzalez was playing PlayStation with his friends on April 1 at around midnight when he felt like something hit him in the head.
"It felt like if you're wearing a bike helmet and someone just smacks the top of your head," he told CBS Los Angeles on Wednesday.
Gonzalez's family is feeling blessed after being literally centimeters away from tragedy.
"It's still a trigger for me to process the thought that I could've lost my son," said Gonzalez's mother, Janet Popoca. "We were asleep and if it did hurt him, we would not have known until we woke up hours later."
Jonathan,18, began screaming — thinking he'd been shot.
"If it wasn't for these (the headset) on my head, it probably would've went through," he said.
He looked up and saw a bullet hole in his window. The shot apparently ripped the curtains over the window fixture off the wall before ricocheting around his room and landing on his bed.
Luckily for Jonathan, he was wearing a Razer gaming headset, which somehow stopped the bullet from hitting him in the head.
"You can see the damage," Gonzalez said as he showed CBS reporters the point of impact left by the bullet on the headset.
Responding LAPD officers couldn't believe what they were hearing when they arrived to survey the scene. They couldn't find a shooter in the area and indicated that the bullet probably wasn't fired from close range.
Still distraught, Gonzalez said of the very close call: "Thinking about it for the first week made me sick."
The family is still hoping an arrest can be made but in the meantime, they're learning not to take the little moments for granted, especially with how suddenly life can be turned on its head.
Razer sent Gonzalez a brand new headset after learning of the incident.
source: https://www.cbsnews.com/news/gamer-jonathan-gonzalez-headset-stray-bullet-bedroom-window/