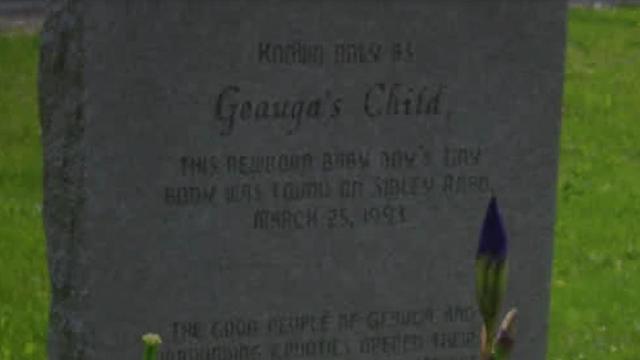 A jury has convicted a woman of murder in the death of a newborn child authorities said was dumped in the woods in Ohio almost three decades ago.
Jurors in Geauga County deliberated for a few hours Monday before reaching a verdict in the case of Gail Eastwood Ritchey, 51, of Euclid. Her bail was then revoked by the judge and she was arrested. A sentencing date has not been set yet. She was acquitted of aggravated murder.
Newspaper carriers found the body of the newborn on a rural road in Thompson Township in March 1993, about a month after the child was born.
Cheryl Jenkins was just 21 years old, out delivering newspapers with her friend Wendy Sweeney, when they found the dead newborn baby on the side of a rural road in Geauga County.
Authorities have said the infant was dumped in woods in a garbage bag and that animals had mutilated the body and dragged it onto the roadway.
Community members paid for a funeral, burial and a headstone marked "Geauga's Child."  The epitaph on the headstone reads: "Geauga's Child lies here now in safety – just too late. Too late to save his life. Too late to make things right. But not too late to teach us all to love and cherish life."
The defendant was identified as the child's mother after a county sheriff's detective submitted DNA to a public genealogical website, created a family tree of 1,400 relatives and finally narrowed the search to her. She was arrested in June 2019.
Defense attorney Steven Bradley disputed a Cuyahoga County coroner's conclusion that the baby was born alive in the bathroom of a Shaker Heights home where his client worked as a nanny. Bradley said she put the newborn in a garbage bag and left it in the woods in Geauga County while driving a church group to a weekend retreat.
"She was isolated and alone," Bradley said. "There was no one to confide with. She was alone with a group of people in her world that never saw her as pregnant. Neither did Gail."
Prosecutors, however, argued that the defendant knew she was pregnant three months before the birth and did nothing to prepare, and they argued that showed intent.
"She literally treated him like a piece of garbage," prosecutors said. "Tossed him in the woods … didn't even bury him."
After the verdict, Bradley said he was "frankly shocked and surprised."
"I certainly respect the jury's verdict, but the state frankly did not have enough evidence to meet their burden of proof," he said.
The defendant, who did not testify, later married the newborn's father. They have three adult children. Authorities said she told investigators at the time of her arrest that she had disposed of another infant's body two years prior to the birth of her son.
source: https://www.cbsnews.com/news/gail-eastwood-ritchey-convicted-murder-1993-death-newborn-geaugas-child/