What does Groundswell want? 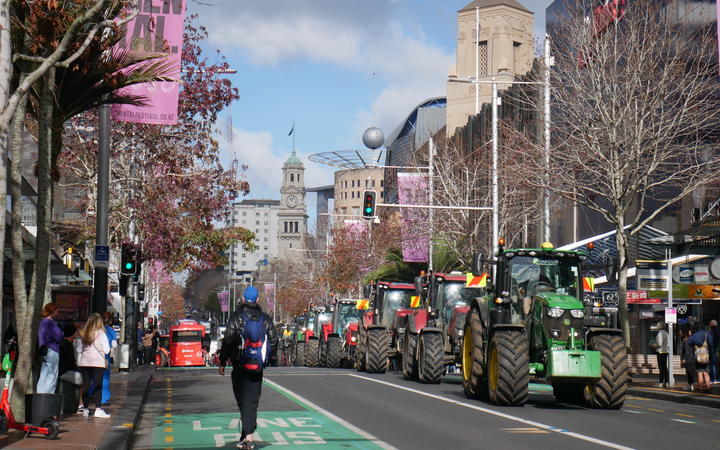 Groundswell has hit the headlines with its tractor protests in towns and cities up and down the country. But what does the farmer lobby group actually want – and is its message helping or hindering the rural sector?

When the farmer lobby group Groundswell announced the 'mother of all protests' last November, its motto was "let's stand together against unworkable regulations and unjustified costs".

But it's far from united with other groups in the agricultural sector.

It's staged major protests in city and town centres and called for the rewrite or complete scrapping of a raft of regulations, including those covering freshwater, indigenous biodiversity, climate change and pastoral land reforms.

As Stuff senior journalist Andrea Vance and Farmers Weekly editor Bryan Gibson explain to The Detail, Groundswell started with a small tractor rally in Southland less than two years ago.

"The movement was borne out of heartland Southland and you've got these two good, Kiwi bloke farmers [Bryce McKenzie and Laurie Paterson] who are leading it," says Vance.

But one of its rallies - the 'howl of a protest' last July – was hijacked by anti-vaxxers and people carrying signs with anti-women and climate change denial messages. The leaders were forced to issue a list of terms that were banned from protest signage.

And now it's ended up in a spat with more established agricultural groups over carbon emissions.

Gibson and Vance explain Groundswell's opposition to He Waka Eke Noa (HWEN), a partnership between the primary sector and government that's working on a way to price on-farm emissions, outside of the emissions trading scheme.

Groundswell says farmers haven't been properly consulted and it's calling for more time and research. It's labelled the likes of DairyNZ and Federated Farmers "pet lobby groups" of the government.

"Groundswell believes that some of these lobby groups are perhaps not working in the best interests of the farming sector and that's the reason for Groundswell's being," Gibson says.

HWEN has tried to educate farmers about the programme, Gibson says, but Groundswell continues to brand the emissions plan as unworkable and released its own alternative.

Despite its success with widespread media coverage of its protests and what it claims is a growing support base of rural and urban followers, Vance says it's an angry vocal minority that doesn't reflect what most farmers are thinking.

"The behaviour and the messages and the way that they've carried on just does the sector an enormous disservice."

"It's not really clear what they stand for, they're all over the show with their messaging and a lot of things that they're calling for are already being done."

Follow The Detail on Apple Podcasts , Spotify, Stitcher, iHeart, Google Podcasts or wherever you listen to your podcasts.