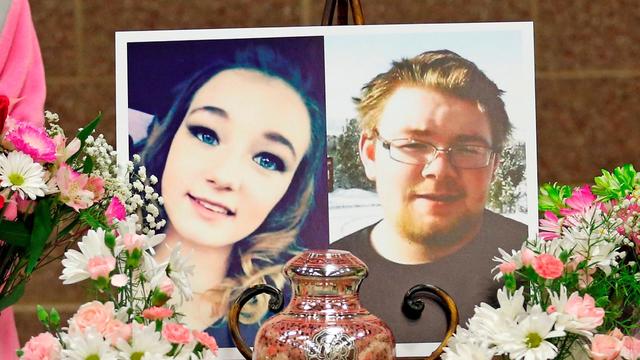 The case of a teenage couple killed and tossed down an abandoned mine shaft culminated in murder convictions Friday for a Utah man who prosecutors said killed the pair because he found them hanging out with his girlfriend. Jarrod Baum, 45, faces up to life in prison after a jury found him guilty of two counts of aggravated murder, aggravated kidnapping and other counts in the 2017 slayings after a monthlong trial.
Brelynne "Breezy" Otteson, 17, and Riley Powell, 18, disappeared days after Christmas. Their bound and stabbed bodies were found months later, in March 2018, in Utah's west desert, 100 feet down an abandoned mine shaft.
"It's long overdue, but we did it, we did it, the state did it. We're here and we got justice for the kids," Amanda Davis, the aunt of Breezy Otteson, told KUTV.
Prosecutors said they died after meeting up with a friend, Morgan Lewis, on Dec. 30 at her home in Eureka, a former silver mining town. While they were there, her boyfriend, Baum, returned home. He grew angry because he had forbidden Lewis from having male friends over, and she previously dated Powell.
Lewis told police her boyfriend tied up Otteson and Powell, duct-taped their mouths and threw them in the back of Powell's Jeep. Then he drove them, along with Henderson, to the site of an abandoned mine outside town.
There, he beat and stabbed Powell before cutting Ottenson's throat, then tossed them down.
"He retaliated against Riley and Morgan and made her watch so she would know this is what happens when you break my rules," said prosecutor Ryan McBride, Fox13 reported.
The couple's family and friends searched for months before Lewis was pulled over during an unrelated traffic stop on March 25. She eventually agreed to cooperate with police.
Much of the prosecution's case was based on her testimony, which was questioned by the defense. Attorney Dallas Young said there was a lack of DNA evidence linking the slayings to Baum
"You cannot believe (Lewis), and you cannot be convinced beyond a reasonable doubt," he argued, according to KSL.
Prosecutors countered that Lewis and Baum had burnt and bleached important evidence, obliterating DNA.
Prosecutors originally sought the death penalty, but Utah County Attorney David Leavitt later took it off the table as he vowed to no longer pursue capital punishment.
Leavitt said Friday that more resources were used in this case than any other in the history of Utah County.
"While a conviction like this will never bring back neither Riley nor Breezy, I hope that today's guilty verdict will in some measure begin the healing process for the victims of this crime," Leavitt said following the verdict. "My heart goes out to the victims of this crime, their families and friends. They have gone through an unspeakable ordeal."
Statement on verdict In the murder trial of Jerrod Baum for the deaths of Breezy Otteson and Riley Powell.
Leavitt said sentencing was scheduled for June 1, and prosecutors would be seeking life without the possibility of parole.
source: https://www.cbsnews.com/news/jarrod-baum-convicted-murders-breezy-otteson-riley-powell-utah-mine-shaft/