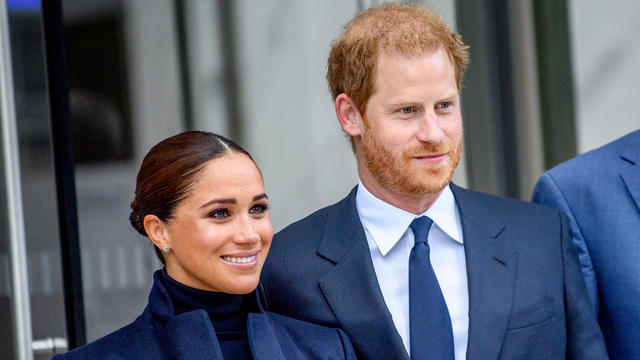 The Duke and Duchess of Sussex stopped over in the U.K. on Thursday to visit 95-year-old Queen Elizabeth II at Windsor Castle while on their way to The Netherlands for the Invictus Games, a spokesperson for the couple told CBS News.
Harry was last reported to be in the U.K. in July 2021, and Meghan isn't believed to have been in the country since 2020, CBS News partner BBC News reported. The couple stepped down as senior royals at the beginning of 2020.
Buckingham Palace said it wouldn't comment on private matters.
Queen Elizabeth has recently faced problems with mobility and has pulled out of a number of public events, including the Maundy Service on Thursday, a traditional coin-giving ceremony she's attended for 52 years. She isn't expected to attend Easter church services this weekend.
Prince Harry didn't attend a London memorial service for his grandfather, the Duke of Edinburgh, last month.
The Invictus Games, a sporting event founded by Prince Harry for injured and sick servicemen and women and veterans, begin April 16th in the Hague.
Haley Ott is a digital reporter/producer for CBS News based in London.
source: https://www.cbsnews.com/news/prince-harry-meghan-markle-queen-elizabeth-uk-netherlands-invictus-games/