Trooper arrested for 2020 fatal shooting of Black driver after chase 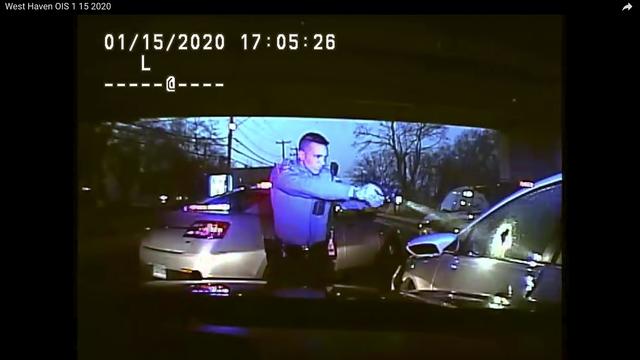 Hartford, Conn. — A Connecticut state trooper who fired seven gunshots into a car and killed a man in 2020 after a high-speed chase was arrested Tuesday night in connection with the shooting, state police said.
Trooper Brian North turned himself in to the state inspector general at the state police barracks in Bethany at about 7:30 p.m., state police said in a statement. The charges weren't immediately announced. Officials said North was placed on paid administrative leave and his police powers were suspended.
North fatally shot Mubarak Soulemane in January 2020 as Soulemane sat in the driver's seat of a car in West Haven, where the chase ended and police boxed in the car.
Soulemane was a 19-year-old form New Haven, Connecticut, CBS Hartford affiliate WFSB-TV reports.
Soulemane's family, the NAACP and other groups said North, who is White, should not have shot Soulemane, who was Black, because police surrounded him and he could not get away. Soulemane had a knife, but police should have attempted to de-escalate the situation, they say.
"The family of Mubarak Soulemane is very happy that, after 2+ years, Trooper Brian North, who murdered Mubarak in West Haven in January 2020, may be brought to justice," Mark Arons, a lawyer for Soulemane's family, said in a statement Tuesday night. "It's a long road ahead. But this is a good day."
North didn't immediately return an email seeking comment, and it was not immediately clear if he has a lawyer who could respond to the arrest.
The Connecticut State Police Union said it was disappointed that the inspector general's office, which investigates police use of deadly force, decided to prosecute North.
"Trooper North was risking his own life while trying to fulfill his oath of office to protect the lives of others," the union said in a statement obtained by WTNH-TV. "Regardless of the Inspector General's decision, we will respect the judicial process while we vigorously defend Trooper North and his actions. It is our obligation to protect Trooper North's constitutional right to due process of law and a fair trial."
State police said Soulemane carjacked a vehicle in Norwalk on Jan. 15, 2020, before leading troopers on a chase on Interstate 95 into West Haven. Officials said Soulemane struck two state police cruisers and a civilian's vehicle before troopers stopped his vehicle by boxing it in. West Haven police also responded to the scene.
State police body camera videos show a West Haven officer smashing out the passenger door window of the stolen car before another trooper shoots Soulemane with a stun gun, which didn't work. North then fired his handgun seven times through the driver's door window when Soulemane displayed the knife, state police said.
Soulemane's family has said he was a community college student who had schizophrenia.
The NAACP and other groups have protested the shooting. At a memorial service for Soulemane days after his death, the Rev. Al Sharpton said something about the killing didn't "smell right" and he vowed to fight for answers for the family.
source: https://www.cbsnews.com/news/police-shooting-fatal-connecticut-2020-seven-shots-black-driver-trooper-brian-north-mubarak-soulemane/