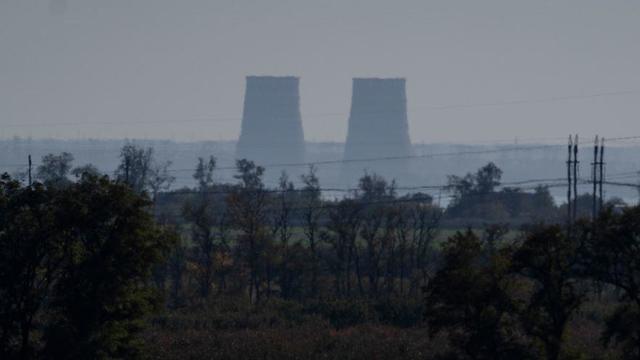 More than a dozen explosions rattled Europe's largest nuclear power plant over the weekend, as renewed shelling around the Ukrainian facility rekindled fears of a possible accident — or even a deliberate strike — that could cause a catastrophic release of radiation. The shelling around Ukraine's sprawling, Russian-occupied Zaporizhzhia Nuclear Power Plant came as the head of the United Nations' nuclear watchdog, the International Atomic Energy Agency (IAEA), warned in a "60 Minutes" interview that "urgent action" was needed to ease the "unprecedented" security threat posed by fighting around the facility.
In an exclusive interview, one of the workers held hostage by the Russian forces who've controlled the plant for months told CBS News the latest shelling had caused serious damage to the plant, and he said it appeared to have been a planned attack on the facility.
He said the angle and direction from which the shells came indicated they were fired from Russian military positions, not Ukrainian forces on the other side of the nearby front lines. The worker, who CBS News cannot identify due to the threat that he and his colleagues have worked under since Russia seized the plant early in its war on Ukraine, said he believed Russian forces had also detonated an explosive inside the facility.
Some shells fell perilously close to the plant's nuclear reactors over the weekend, and a storage building containing radioactive waste was damaged. The explosions prompted IAEA chief Rafael Mariano Grossi to warn that whoever was lobbing shells at the plant was taking "huge risks and gambling with many people's lives."
"We were fortunate a potentially serious nuclear incident did not happen. Next time, we may not be so lucky," Grossi warned in a statement on Sunday. He said it was a "close call."
Russian government spokesman Dmitry Peskov accused Ukraine's armed forces of causing the blasts, without offering any evidence.
"This cannot but cause our concern," Peskov told reporters on Monday. "We call on all countries of the world to use their influence so that the Ukrainian armed forces stop doing this."
The Zaporizhzhia plant worker told CBS News he believed Russia had attacked the plant in an act of sabotage, intended to make it useless in the event Ukraine's slowly advancing forces should manage to retake the facility.
Russian forces have held the plant's workers — at gunpoint according to some reports — for months. They have effectively tried to steal the plant's power capacity by linking it to Russia's national power grid, but they've failed. The worker said he believed Moscow's "plan B" was to simply sabotage the Zaporizhzhia plant, which has sat largely idle for months, so Ukraine can't use it either.
Given the amount of radioactive material still at the facility, however, that's an incredibly dangerous gambit. The staffer told CBS News the occupying Russian forces were behaving like "monkeys playing with hand grenades." He blamed them for all of the damage, not just over the weekend, but in a series of attacks since the spring.
If one of the plant's nuclear reactors is seriously damaged, the world will know about it quickly, he said, because it would likely spark an immediate nuclear catastrophe.
"It's an unprecedented thing, really, in so many ways," Grossi told Lesley Stahl about the threat around the Zaporizhzhia plant for this week's "60 Minutes."
"This place is at the front line, which makes the whole thing so volatile and in need of an urgent action," Grossi said.
Before the war, the power plant supplied about 20% of Ukraine's power, and while its six reactors are now off-line, they still need a constant flow of water to keep the fuel at their cores cool, and that requires a constant supply of electricity. If they overheat, there could be a nuclear meltdown within hours.
Shelling around the plant has cut the main electricity supply from the nearby, Ukrainian-held city of Zaporizhzhia, multiple times, forcing the plant to rely on diesel backup generators to keep the water flowing for days at a time.
"And you don't want the biggest nuclear power plant in Europe — one of the biggest in the world — to be cooled with, basically an emergency system which is dependent on fuel," Grossi told Stahl, "because when your diesels are out, or whatever you put in it to make them work, then what happens? Then you have a meltdown. Then you have a big radiological nuclear emergency or an accident, and this is what we are trying to prevent."
Ukraine, its international partners in Washington and Europe and the United Nations, have all urged Russia to pull its military forces out of the Zaporizhzhia plant for months so a demilitarized zone can be established around the facility. Moscow has given no indication so far that it's contemplating such a move.
"I'm not giving up until this zone has become a reality," Grossi said on Sunday. "As the ongoing apparent shelling demonstrates, it is needed more than ever."
Chris Livesay is a CBS News foreign correspondent based in Rome.
source: https://www.cbsnews.com/news/ukraine-news-nuclear-power-plant-russia-attack-worker-to-cbs-news-iaea-close-call/