An investigation has found a KiwiRail employee thought he had applied the brakes on a remote-controlled shunt locomotive and went to make a call on his phone, before the engine fell into the sea. 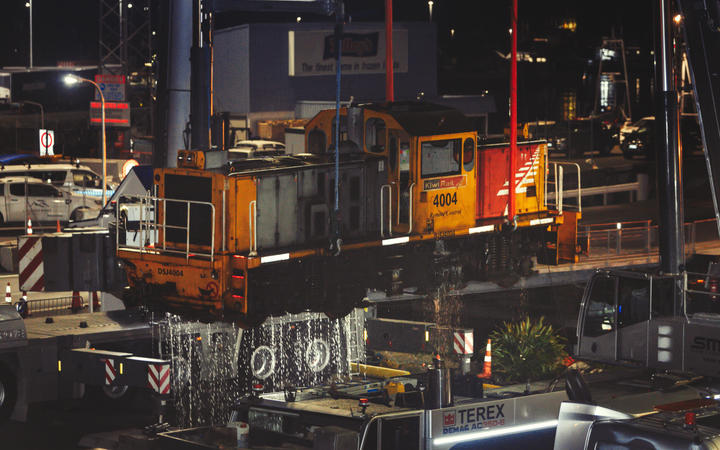 The remote control operator was shunting a wagon into the Picton container terminal last September, when the incident occurred.

KiwiRail has released a summary of its investigation, which found the brakes were not applied before the operator walked away from the shunt locomotive and wagon, looking for his cellphone to call the container terminal.

At the time of the incident there was no rail ferry berthed at the wharf and the linkspan, a drawbridge used to transfer cargo onto vessels, was left in a raised position.

The shunt locomotive and wagon travelled 139.2 metres across the yard, reaching a speed of 13 kilometres per hour and taking just over a minute to travel across the linkspan and enter the water.

The locomotive and wagon became separated on the linkspan, with the locomotive sinking and the wagon, which was carrying empty hazardous goods containers, remaining afloat.

The wagon was removed that evening but it took two more days to retrieve the 50-tonne locomotive from the sea floor.

A local salvage team used airbags to float the engine and tow it 400m to where two 350-tonnes cranes could haul it out.

The KiwiRail investigation also found the remote control operator had overridden the vigilance alarm in the remote-control pack - which applies emergency brakes to the locomotive after a certain timeframe if no input.

The operator had overridden the vigilance cycle by turning off the key in the remote control pack earlier in his shift and during the previous shift.

Testing of the remote control pack after the incident showed it was working without fault.

The report also found the remote control operator was certified for the role four months before the incident, but should have received monthly safety observations for the first three months, then every other month for the next nine months, but he had not received any.

KiwiRail government relations advisor Dave Allard said the organisation had taken the investigation very seriously, and since the incident had put in place mitigations to ensure there was no repeat occurrence.

He said KiwiRail were unable to disclose the personal details of its staff, including if any disciplinary or corrective actions had been undertaken.

A derailing block had been placed in the yard and operating codes around the usage of the remote packs to prevent unintended movement were being reviewed.

"KiwiRail will also be carrying out a review of all areas on the network where a similar risk exists and put action plan in place to address any identified hazards."

Engineering solutions to protect the linkspans and workers would be included in the interisland resilience connection project, when the Wellington and Picton ferry terminals are upgraded.