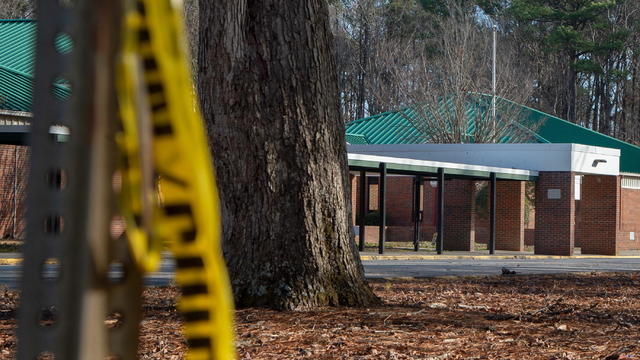 A school board in Newport News, Virginia, has voted to remove district superintendent George Parker III following the shooting of a teacher by a 6-year-old student. An attorney for Abby Zwerner, the first-grade teacher who was shot and wounded, claimed earlier Wednesday that school administrators failed to heed multiple warnings that the student had a gun.
In a 5-1 vote at a Wednesday night meeting, the school board decided to fire school district superintendent George Parker III as part of a separation agreement that will pay Parker a little over $502,000 in severance — two years of his current base salary of $251,000. Parker has been sharply criticized by parents and teachers since the Jan. 6 shooting.
Park will be relieved of his duties Feb. 1.
Parker's departure had been expected since a school board agenda was posted Tuesday showing that the panel was set to vote on his separation package. The separation and severance agreement says the board has decided to "terminate the Contract and Superintendent's employment."
Following the vote, several members praised Parker's past performance as superintendent.
Board member Gary Hunter delivered a long defense of Parker as some members of the audience sighed and told him to "move on." Hunter said he thought Parker was being unfairly blamed for the shooting and said the real problem is the lack of "commonsense gun laws."
"Getting rid of someone is not going to fix this particular problem," Hunter said.
Hunter likened the situation to a school bus full of kids with brakes that have failed, "and now what we plan to do is throw the bus driver off the bus. And we want to replace them with another person while it's in motion."
He also described the fallout of the shooting as something of a learning experience for how to deal with similar situations moving forward, comparing it to the events of Sept. 11.
Toward the end of his extended remarks, another board member could be heard whispering to Hunter, "it's not about you right now."
As part of the agreement, board Chair Lisa Surles-Law read a statement in which the board said the decision to terminate Parker was made "without cause" and that Parker "is a capable division leader" who has served the school district for almost five years "through some extremely challenging circumstances."
Parker has said that at least one administrator was told on the day of the shooting that the boy might have a weapon, but no weapon was found when his backpack was searched. Police have said that school officials did not tell them about that tip before the shooting, which happened hours later.
Zwerner was shot in front of her other first-grade students in what police have described as an "intentional" shooting. She was able to evacuate her classroom and another school employee, who Zwerner's lawyer, Diane Toscano, said was a teacher, restrained the 6-year-old boy.
Zwerner was hospitalized with life-threatening injuries and has been recovering at home since Jan. 19. Toscano said that the bullet remains in Zwerner's body, and said the teacher continues to undergo surgeries and physical therapy.
It's unclear if the 6-year-old, who is also hospitalized, will face any charges.
source: https://www.cbsnews.com/news/abigail-zwerner-george-parker-iii-newport-news-board-votes-to-remove-superintendent/