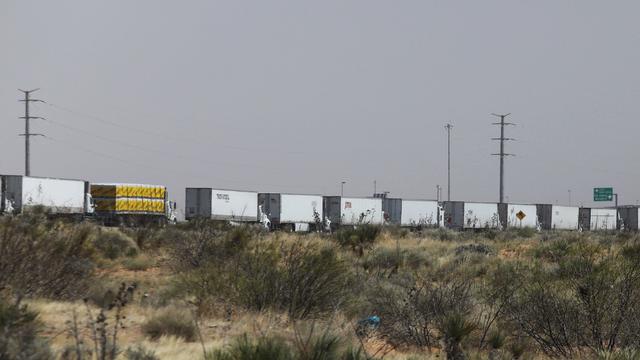 Texas Gov. Greg Abbott on Wednesday defied intensifying pressure over his new border policy that has gridlocked trucks entering the U.S. and shut down some of the world's busiest trade bridges as the Mexican government, businesses and even some allies urge him to relent.
The two-term Republican governor, who has ordered that commercial trucks from Mexico undergo extra inspections as part of a fight with President Joe Biden's administration over immigration, refused to fully reverse course as traffic remains snarled.
The standoff has stoked warnings by trade groups and experts that U.S. grocery shoppers could soon notice shortages on shelves and higher prices unless the normal flow of trucks resumes.
Abbott announced Wednesday that he would stop inspections at one bridge in Laredo after reaching an agreement with the governor of neighboring Nuevo Leon in Mexico. But some of the most dramatic truck backups and bridge closures have occurred elsewhere along Texas' 1,200-mile border.
"I understand the concerns that businesses have trying to move product across the border," Abbott said during a visit to Laredo. "But I also know well the frustration of my fellow Texans and my fellow Americans caused by the Biden administration not securing our border."
Abbott said inbound commercial trucks elsewhere will continue to undergo thorough inspections by state troopers until leaders of Mexico's three other neighboring states reach agreements with Texas over security. He did not spell out what those measures must entail.
At the Pharr-Reynosa International Bridge, where more produce crosses than any other land port in the U.S., truckers protesting Abbott's order had effectively shut down the bridge since Monday. But Wednesday afternoon, U.S. Customs and Border Protection officials said the protests had concluded and commercial traffic had resumed.
Nuevo Leon Gov. Samuel García joined Abbott in Laredo, where backups on the Colombia Solidarity Bridge have stretched for three hours or longer. Garcia said Nuevo Leon would begin checkpoints to assure Abbott they "would not have any trouble."
Abbott said he was hopeful other Mexican states would soon follow and said those states had been in contact with his office. On Tuesday, the governors of Coahuila and Tamaulipas had sent a letter to Abbott calling the inspections overzealous.
"This policy will ultimately increase consumer costs in an already record 40-year inflated market — holding the border hostage is not the answer," the letter read.
The slowdowns are the fallout of an initiative that Abbott says is needed to curb human trafficking and the flow of drugs. Abbott ordered the inspections as part of "unprecedented actions" he promised in response to the Biden administration winding down a public health law that has limited asylum-seekers in the name of preventing the spread of COVID-19.
In addition to the inspections, Abbott also said Texas would begin offering migrants bus rides to Washington, D.C., in a demonstration of frustration with the Biden administration and Congress. Hours before the news conference in Laredo, Abbott announced the first bus carrying 24 migrants had arrived in Washington.
During the last week of March, Border Protection officials said the border averaged more than 7,100 crossings daily.
White House spokeswoman Jen Psaki called Abbott's order "unnecessary and redundant." Trucks are inspected by U.S. Customs and Border Protection agents upon entering the country, and while Texas troopers have previously done additional inspections on some vehicles, local officials and business owners say troopers have never stopped every truck until now.
Cross-border traffic has plummeted to a third of normal levels since the inspections began, according to Mexico's government. Mexico is a major supplier of fresh vegetables to the U.S., and importers say the wait times and rerouting of trucks to other bridges as far away as Arizona has spoiled some produce shipments.
The escalating pressure on Abbott, who is up for reelection in November, has come from his supporters and members of his own party.
The Texas Trucking Association, which has endorsed Abbott, said that the current situation "cannot be sustained."
John Esparza, the association's president, said he agrees with attempts to find a remedy with Mexico's governors. But he said if talks take long, congestion could overwhelm bridges where inspections by Texas are no longer being done.
"The longer that goes, the more the impact is felt across the country," Esparza said. " It is like when a disaster strikes."
The slowdowns have set off some of widest backlash to date of Abbott's multibillion-dollar border operation, which the two-term governor has made the cornerstone of his administration. Texas has thousands of state troopers and National Guard members on the border and has converted prisons into jails for migrants arrested on state trespassing charges.
Critics question how the inspections are meeting Abbott's objective of stopping the flow of migrants and drugs. Asked what troopers had turned up in their truck inspections, Abbott directed the question to the Texas Department of Public Safety.
As of Monday, the agency said it had inspected more than 3,400 commercial vehicles and placed more than 800 "out of service" for violations that included defective brakes, tires and lighting. It made no mention of whether the inspections turned up migrants or drugs.
source: https://www.cbsnews.com/news/texas-gov-greg-abbott-defies-pressure-over-new-border-policy-thats-gridlocking-trucks-for-hours/