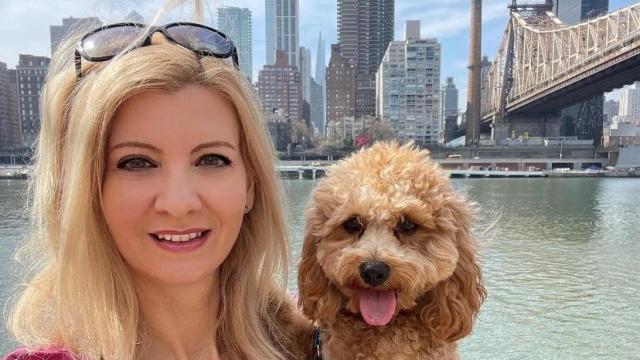 New details are emerging about the final hours of Orsolya Gaal, a 51-year-old wife and mother who was stabbed to death in a horrific killing in New York City. A medical examiner's report showed Gaal died of multiple sharp force injuries to her neck.
Gabe Veras, the manager at the Forest Hills Station House restaurant in Queens, told CBS New York that video shows Gaal was at the bar on Friday night and employees saw her there.
"Orsolya was here on Friday around 11:45 to 12:30. She came in alone she left alone. She had her usual -- a Moscow mule," Veras said.
Gaal was a regular, often coming alone, he said. Veras says he spoke to her last Tuesday.
"She had come back from a concert, seeing her favorite composer," Veras said. "She was delighted at that. She was elated that she saw this composer live. She was very into the arts and music."
Sources tell CBS New York Gaal went to the show at Lincoln Center with female friends Friday night. She returned to Queens, visited the local bar and then returned to her home on Juno Street.
Her body was found the next morning in a duffel bag a few blocks away. Sources told CBS New York Gaal had been stabbed more than 50 times.
Sources also told the station detectives are looking at the victim's relationship with several men. They are probing possible past romantic links to at least one man based on her electronic communications with him.
Saturday, Gaal's 13-year-old son was questioned in the case, but has since been released.
Police say her husband and 17-year-old son were out of town when the incident happened.
As the investigation continues, officers remain stationed outside of Gaal's hone.
The NYPD is now offering a reward of up to $3,500 for anyone with information that leads to an arrest and conviction in the case.
As for those at the Forest Hills Station House, they are devastated by Gaal's death.
"It's super tragic," Veras said. "It's very surreal how it's going down. We can't imagine what her family is going through. We all feel bad."
source: https://www.cbsnews.com/news/orsolya-gaal-murder-final-hours-before-stabbing-duffel-bag-queens/