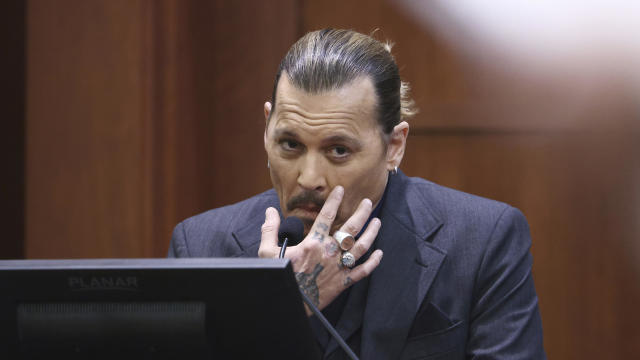 Johnny Depp is expected to take the stand for a fourth day Monday to continue being cross-examined by Amber Heard's attorneys in his lawsuit against his ex-wife.
Depp has been on the stand in Fairfax County Circuit Court since Tuesday afternoon. The actor has spent much of that time describing the couple's volatile relationship and denying that he ever abused his ex-wife. Heard lawyer J. Benjamin Rottenborn's cross-examination of Depp lasted all of Thursday and is scheduled to continue Monday.
Heard's attorneys are trying to derail Depp's libel lawsuit, which alleges that she falsely portrayed him as a domestic abuser and ruined his acting career. They claim that Depp did indeed abuse Heard, both physically and sexually, and argue that Depp can't deny it because he was often drunk and high on drugs to the point of blacking out.
Depp said that Heard often violently attacked him. And he argued that his movie career suffered after she wrote a 2018 op-ed piece in The Washington Post, which prompted his libel lawsuit.
Heard never mentioned Depp by name in the article, but Depp's lawyers said it was a clear reference to accusations Heard made when she sought a 2016 restraining order against him.
Depp said the accusations and the article contributed to an unfairly ruined reputation that made him a Hollywood outcast and cost him his role in the lucrative "Pirates of the Caribbean" movie franchise.
source: https://www.cbsnews.com/live-updates/johnny-depp-resumes-testimony-in-amber-heards-suit-watch-live-stream-today-2022-04-25/