Atmospheric methane levels surged by a record amount in 2021: NOAA 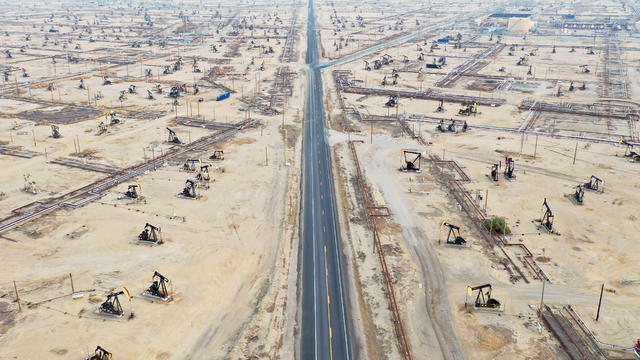 The atmospheric concentration of methane — a greenhouse gas that contributes significantly to global warming — increased by a record amount in 2021 for the second year in a row, the National Oceanic and Atmospheric Administration said Thursday. Levels of carbon dioxide also increased at a "historically high rate," NOAA said.
A preliminary analysis showed atmospheric methane levels increased by 17 parts per billion (ppb) in 2021, which NOAA said was "the largest annual increase recorded since systematic measurements began in 1983." Atmospheric methane levels averaged 1,895.7 ppb in 2021, which is approximately 162% higher than pre-industrial levels.
NOAA's findings also provided alarming news about carbon dioxide, which it said was the primary contributor to human-caused global warming. Last year was the 10th year in a row that saw a more than 2 parts per million increase, which NOAA said is the "fastest sustained rate of increase in the 63 years since monitoring began." Approximately 36 billion tons of carbon dioxide were emitted due to human activity in 2021, NOAA said.
"Our data show that global emissions continue to move in the wrong direction at a rapid pace," NOAA Administrator Rick Spinrad said in a statement announcing the findings. "The evidence is consistent, alarming and undeniable."
Methane and carbon dioxide impact global warming in different ways. Carbon dioxide stays in the atmosphere for much longer than methane — but methane is approximately 25 times better at trapping heat, NOAA said, meaning it has a much stronger short-term influence on climate change. Scientists estimate that approximately 30% of methane emissions come from fossil fuel production and use, NOAA said, and livestock farming is also a significant contributor.
"Reducing methane emissions is an important tool we can use right now to lessen the impacts of climate change in the near term, and rapidly reduce the rate of warming," Spinrad said in the statement. "Let's not forget that methane also contributes to ground-level ozone formation, which causes roughly 500,000 premature deaths each year around the world."
At a United Nations climate summit in 2021, President Joe Biden pledged to work with other nations to cut methane emissions 30% worldwide by 2030, The Associated Press reported.
Victoria Albert is a Sr. News Editor at CBS News. Reach her at [email protected]
source: https://www.cbsnews.com/news/methane-gas-record-level-carbon-dioxide-climate-change-noaa/