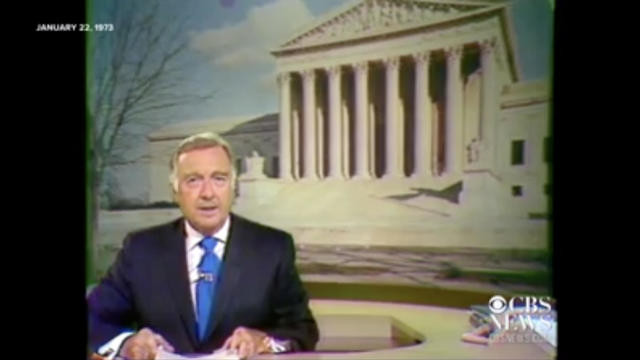 Watch the original CBS News coverage from 1973 in the video player above.
On Jan. 22, 1973, Walter Cronkite began the "CBS Evening News" broadcast with the Supreme Court's decision in Roe v. Wade.
"In a landmark ruling, the Supreme Court today legalized abortions," he announced. "The majority, in cases from Texas and Georgia, said that the decision to end the pregnancy during the first three months belongs to the woman and her doctor, not the government."
"Thus, the anti-abortion laws of 46 states were rendered unconstitutional," Cronkite said.
Roe v. Wade would stand for nearly 50 years, until it was overturned by a more conservative Supreme Court majority on June 24, 2022.
Cronkite introduced CBS News correspondent George Herman to deliver a report detailing the 7-2 Supreme Court decision on Roe, which made it legal for women throughout the country to terminate a pregnancy within the first three months.
"In two related cases in eight separate opinions, the nine justices made abortion largely a private matter," Herman said.
As Herman reported, the ruling meant "states may make no laws restricting a doctor's right to decide his patient needs an abortion and to carry out an abortion in the first three months of a pregnancy."
In cases between four and six months of pregnancy, individual states could establish laws regulating the procedure, and states were allowed to prohibit abortions only after the point of viability, at around seven months, with exceptions to protect the mother. Many states were forced to make dramatic revisions in their laws in order to comply with the Supreme Court ruling.
Herman reported the "newly liberalized abortion law brought immediate reaction." Dr. Alan Guttmacher of Planned Parenthood said the decision to "raise the dignity of woman and give her the freedom of choice in this area" was historic, while Monsignor James McHugh, a longtime leader on human life issues in the Catholic Church, said it was "teaching people abortion is a rather innocuous procedure provided there are proper legal safeguards" and that it would "tear down the respect" for life.
President Nixon's White House offered immediate no comment, Herman said.
The CBS News report that night also included a portion of an interview with a woman known as "Mary Doe" who had been a plaintiff in a related abortion case. She said she had had two children taken away and was unable to take care of more.
The national debate over abortion only intensified in the years following Roe v. Wade. Subsequent Supreme Court rulings allowed states more latitude to impose regulations limiting abortion access, and Republican-led states passed increasingly restrictive laws challenging Roe and seeking to get it overturned.
This is an updated version of a story first published on May 19, 2019.
source: https://www.cbsnews.com/news/roe-v-wade-1973-abortion-ruling-50-years-cbs-news/