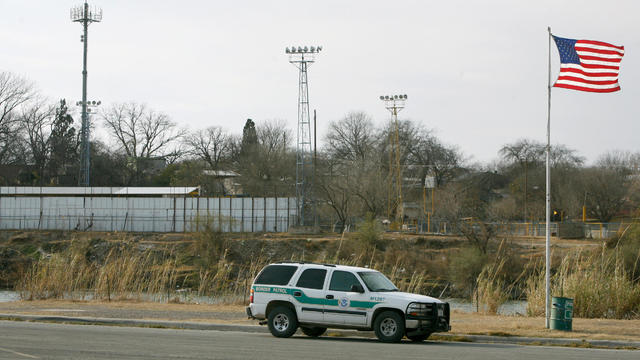 Multiple agencies are still searching for a Texas Army National Guard soldier who went missing Friday, the Texas Military Department said Saturday. The soldier, who has not been identified, went missing in Eagle Pass, Texas, while assigned to the U.S.-Mexico border.
A multi-agency search that includes the Texas Department of Public Safety, Texas Parks and Wildlife, Texas Rangers and Border Patrol is underway. Texas Governor Greg Abbott said his office is working with law enforcement agencies as well.
According to the TMD, the soldier went missing after attempting to help two migrants who appeared to be drowning. Texas Rangers, which is leading the investigation into the missing soldier, believe the migrants were "involved in illicit transnational narcotics trafficking," TMD said. The migrants were taken into custody by U.S. Customs and Border Patrol.
Search efforts on Friday were complicated by the strength of the Rio Grande's currents, which forced rescue teams to halt dive operations. The Texas Military Department acknowledged reports of a fatality related to the incident, but clarified that those reports were inaccurate.
"The search for the missing TMD soldier will continue until we have exhausted all available resources," the department said Saturday. "Our thoughts and prayers remain with the family of the soldier."
The soldier was assigned to Operation Lone Star — a multi-billion dollar initiative launched by Abbott in March 2021 aimed at policing the southern border. While Abbott has insisted the operation is necessary the deter illegal immigration, Democratic lawmakers have criticized it as an expensive and ineffective political stunt.
Tori B. Powell is a breaking news reporter at CBS News. Reach her at [email protected]
source: https://www.cbsnews.com/news/national-guard-texas-soldier-missing/