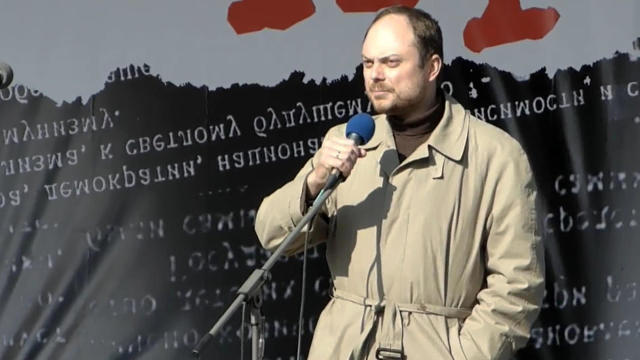 Vladimir Kara-Murza, a prominent Russian opposition activist and politician who has suffered two suspected poisoning attacks, was detained near his house Monday and sentenced to 15 days in jail for disobeying a police order. Kara-Murza was arrested just a few hours after CNN aired an interview with him in which he called President Vladimir Putin's government a "murderous regime" and suggested Russia's war in Ukraine would lead to Putin's downfall.
The dissident's lawyer, Vadym Prokhorov, ridiculed the arrest, citing police statements claiming Kara-Murza "behaved inadequately at the sight of police officers, changed the trajectory of his movement, accelerated his pace, and tried to hide when asked to stop."
Prokhorov rejected that version of events, saying police officers "were already waiting in the yard of the house in a police bus brought there in advance and [Kara-Murza] was immediately detained after getting out of the car."
"In modern Putin's Russia, it is enough to 'change the trajectory of movement' in the yard of your own home and get 15 days in prison," Prokhorov wrote online.
Kara-Murza is a vocal opponent of the war in Ukraine and has launched an anti-war committee along with other opposition figures.
"I have absolutely no doubt that the Putin regime will end over this war in Ukraine," he told CNN, adding that it "doesn't mean it's gonna happen tomorrow. The two main questions are time and price. And by price, I do not mean monetary — I mean the price of human blood and human lives, and it has already been horrendous, but the Putin regime will end over this and there will be a democratic Russia after Putin."
Kara-Murza is a long-time Kremlin critic who fell deathly ill on two separate occasions in Moscow — in 2015 and 2017 — with symptoms consistent with poisoning. The activist himself called it a deliberate attack by Putin's government in retaliation for his lobbying efforts to get the U.S. and Europe to impose sanctions against Russian officials.
Kara-Murza barely survived the first indecent, having suffered kidney failure. Samples smuggled out of Russia by Kara-Murza's family were given to the FBI, which investigated the case as "intentional poisoning."
"Twice in the last seven years, Russian authorities have tried to kill [Kara-Murza] for seeking personal sanctions against thieves and murderers, and now they want to throw him in jail for calling their vile and bloody war a war. I demand his immediate release!" Kara-Murza's wife, Yevgeniya, said in a tweet.
One of his close friends, prominent politician and opposition leader Boris Nemtsov, was shot and killed in 2015 near the Kremlin.
Despite repeatedly being targeted for his work, Kara-Murza returned to Moscow, surprising many supporters.
"Look, I am a Russian politician, I have to be in Russia, it is my home country," he told CNN. "The biggest gift we could give to the Kremlin is to give up and run."
It was not immediately clear why exactly Kara-Murza was targeted this time, but his arrest came amid a major crackdown on Kremlin opponents. Russia passed draconian laws in March allowing law enforcement to prosecute anyone who uses the words "war" or "invasion" to describe Russia's actions in Ukraine or who criticizes the Russian Armed Forces.
Russia also has stringent laws against anyone "discrediting" authorities, which have prompted many opposition figures to flee the country in recent years.
source: https://www.cbsnews.com/news/vladimir-kara-murza-russia-arrest-ukraine-war-vladimir-putin/