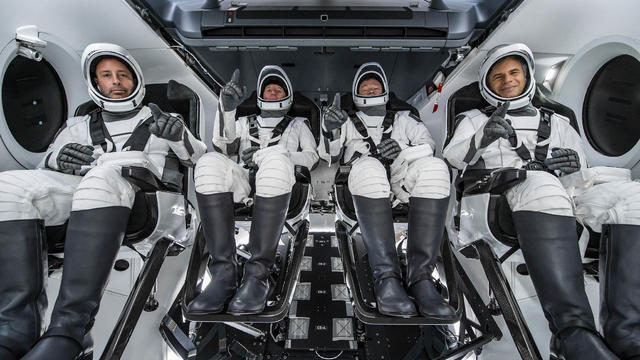 SpaceX and the Houston-based company Axiom Space are gearing up to make history by launching four private citizens to the International Space Station on Friday. The mission is the first NASA-sanctioned, fully commercial flight to the International Space Station — a key step in a government push to encourage private-sector development on the high frontier.
The crew of four is led by mission commander Michael López-Alegría, a former NASA astronaut and now a vice president at Axiom Space. He is joined aboard by three entrepreneur-philanthropists: American Larry Connor, Canadian Mark Pathy and Israeli Eytan Stibbe. They are set to blast off from pad 39A at the Kennedy Space Center in Florida at 11:17 a.m. EDT Friday.
"Weather is 90% favorable for liftoff," SpaceX tweeted Friday morning.
Targeting 11:17 a.m. ET for today’s Falcon 9 launch of @Axiom_Space’s Ax-1 mission; weather is 90% favorable for liftoff https://t.co/2PxkVtzSKT pic.twitter.com/5XfsiCfl41
The Axiom 1 mission, or Ax-1 for short, will mark the sixth piloted launch of a SpaceX Crew Dragon capsule. It's the second fully commercial flight to orbit — following the privately financed Inspiration4 mission last September — and the first all-commercial visit to the International Space Station.
"This really looks like a government NASA mission from the outside. The difference is, it's a private company and these are private customers. And this is a real turning point in human space flight," López-Alegría told CBS News senior national correspondent Mark Strassmann.
Over the last two decades, 11 private astronauts, or "space tourists," have visited the space station under commercial arrangements with the Russian space agency, but they were all accompanied by professional cosmonauts. The Ax-1 crew is the first all-commercial, non-government flight to the station and the first sanctioned by NASA.
Opening the space station to commercial use is part of a push by NASA to facilitate private-sector operations in low-Earth orbit and to encourage development of commercially operated research stations after the ISS is retired in the 2030 timeframe.
So far, Axiom Space has booked four private astronaut missions through SpaceX and is designing modules that will be attached to the station for commercial use. Before the lab is retired, a solar power and cooling system will be added so the Axiom modules can be disconnected to fly on their own as an independent outpost.
"This is a historic mission for two reasons," said Axiom CEO Mike Suffredini, a former NASA space station program manager. "This is the first completely private mission to the International Space Station. In addition to that, Axiom Space was founded to build a commercial space station, the first module will launch in a little over two years from now.
"But this is our very first mission of probably hundreds of missions to come over the next several decades as we build the Axiom space station and provide services in low-Earth orbit for many decades to come."
Assuming an on-time takeoff, the capsule will make an automated 20-hour rendezvous and approach to the space station, moving in for docking at the forward Harmony module's space-facing port around 7:45 a.m. Saturday.
The Axiom-1 crew plans to spend a little more than a week aboard the lab complex carrying out a variety of commercially-sponsored bio-medical experiments, technology demonstrations and outreach before undocking and returning to Earth with splashdown in the Atlantic Ocean or the Gulf of Mexico, depending on the weather.
Michael López-Alegría is a veteran of four space flights, including a long-duration stay on the station, logging a cumulative 257 days off planet before retiring from NASA in 2012. He received refresher training for the Ax-1 mission and serves as a mentor to his rookie crewmates.
Larry Connor, a veteran private pilot, is a "non-profit activist investor" and founder of the Connor Group, a real estate investment firm managing $3.5 billion in assets. He is an acrobatic pilot, off-road racer and mountaineer.
Mark Pathy is an investor/philanthropist, chairman and CEO of a Montreal-based investment and finance company.
Eytan Stibbe flew F-16 jets in the Israeli air force, later serving in the reserves while building a successful business career. During active duty, he served under Ilan Ramon, who went on to become the first Israeli in space in but lost his life in the 2003 Columbia shuttle disaster.
Bill Harwood has been covering the U.S. space program full-time since 1984, first as Cape Canaveral bureau chief for United Press International and now as a consultant for CBS News. He covered 129 space shuttle missions, every interplanetary flight since Voyager 2's flyby of Neptune and scores of commercial and military launches. Based at the Kennedy Space Center in Florida, Harwood is a devoted amateur astronomer and co-author of "Comm Check: The Final Flight of Shuttle Columbia."
source: https://www.cbsnews.com/news/spacex-launch-space-station-how-to-watch-time-channel-stream-2022-04-08/