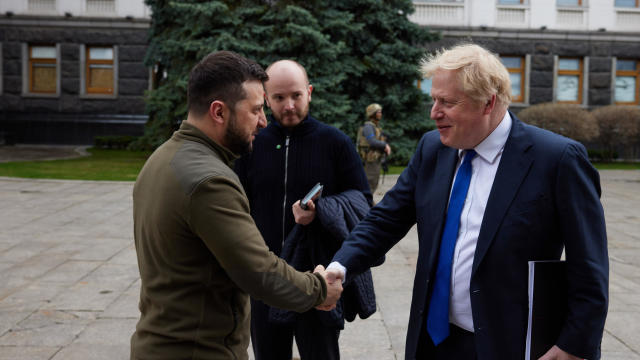 U.K. Prime Minister Boris Johnson met with Ukrainian President Volodymyr Zelenskyy in Kyiv on Saturday. Johnson confirmed the visit in a tweet, which included a photo of the two leaders shaking hands.
"Today I met my friend President @ZelenskyyUa in Kyiv as a show of our unwavering support for the people of Ukraine," he said. "We're setting out a new package of financial & military aid which is a testament of our commitment to his country's struggle against Russia's barbaric campaign."
The 10 Downing Street YouTube account shared a video of the two speaking after their meeting.
Zelenskyy said he was grateful for the prime minister's visit, calling it an important meeting during "very difficult and turbulent times for our country."
"At the same time, you came here, and we are especially grateful for this to happen. This is a true reflection for the decisive and significant support to Ukraine from United Kingdom and we are always grateful for that — we shall always remember that," Zelenskyy said, according to a translation of his speech by Downing Street.
The Ukrainian president confirmed the two spoke about the need for more sanctions against Russia, as well as continued support for Ukrainian defense, from the United Kingdom as well as the rest of the West.
In his remarks, Johnson said, "Thank you very much for having me here today during this incredibly difficult time for you and for your wonderful country."
Johnson said intelligence the U.K. had at the start of Russia's invasion suggested that Kyiv would quickly fall to Russian forces — and they were wrong. "I think that Ukrainians have shown the courage of a lion. But you, Volodymyr, have given the roar of that lion. I thank you for what you have been able to do — I think your leadership has been extraordinary."
Johnson said Russian President Vladimir Putin has committed war crimes and, as his forces stumble, he will "intensify the pressure in Donbas and in the east." The prime minister called the need to support Ukraine "so vital."
"Together with our partners we're going to ratchet up the economic pressure, and we will continue to intensify week by week the sanctions on Russia," Johnson said. He also promised help with defense systems, including demining the country.
Johnson said he'd seen much of the "beautiful" country of Ukraine during his visit. "I've also seen the tragic effects of the war — an inexcusable war — an absolutely inexcusable and unnecessary war," he said.
"But having been here in Kyiv for just a few hours... I have no doubt at all that an independent, sovereign Ukraine will rise again, thanks, above all, to the heroism, the courage, of the people of Ukraine," he said.
Ukraine's Embassy in London tweeted a photo of the two leaders during their discussions Saturday with the caption "surprise."
Surprise 😉 pic.twitter.com/AWa5RjYosD
Sophie Reardon is a News Editor at CBS News. Reach her at [email protected]
source: https://www.cbsnews.com/news/ukraine-boris-johnson-volodymyr-zelenskyy-meeting-kyiv-russia-war/