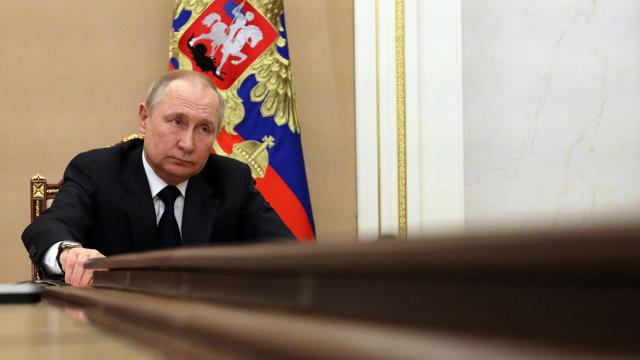 Washington — The U.S. announced Wednesday a new sanctions package against Russia in response to reported atrocities around Ukraine's capital city of Kyiv, which includes economic penalties on Russian President Vladimir Putin's adult children and top Russian security officials.
The additional sanctions were rolled out in coordination with the Group of 7 and European Union and are designed to impose "severe and immediate economic costs" on Russia for its brutalities in Ukraine, the White House said.
"As long as Russia continues its brutal assault on Ukraine, we will stand unified with our allies and partners in imposing additional costs on Russia for its actions," the White House said in an announcement of the sanctions.
The measures include a ban on all new investment in Russia, increased sanctions on Russia's largest financial institutions and state-owned enterprises, including Sberbank and Alfa Bank, and sanctions on Russian government officials and members of their families. Those targeted by the full blocking sanctions include Putin's two adult daughters, Russian Foreign Minister Sergei Lavrov's wife and daughter, and members of Russia's Security Council, including former President and Prime Minister of Russia Dmitry Medvedev and Prime Minister Mikhail Mishustin.
The actions targeting Sberbank, and Alfa Bank, Russia's largest private bank, freeze any of their assets touching a U.S. financial institution and prohibit U.S. citizens from doing business with the two banks. The sanctions on state-owned enterprises, which are not yet named, prohibit any U.S, citizen from doing business with the entities.
Like with earlier economic measures on Russian financial institutions, there is a carve-out for energy.
The measures are intended to "degrade key instruments on Russian state power" and impose swift economic harm on Russia, sources told CBS News on Tuesday.
President Biden told reporters at the White House on Monday that he would seek additional sanctions on Russia after Ukrainian President Volodymyr Zelenskyy visited Bucha, a city outside of Kyiv, where Ukrainian officials said they discovered the bodies of civilians after Russian forces withdrew from the area.
"You saw what happened in Bucha. This warrants him — he is a war criminal," Mr. Biden said of Russian President Vladimir Putin. "But we have to gather the information, we have to continue to provide Ukraine with the weapons they need to continue the fight, and we have to get all the details so this can be an actual — have a wartime trial. This guy is brutal, and what's happening in Bucha is outrageous, and everyone's seen it."
White House national security adviser Jake Sullivan also told reporters at the White House to expect further sanctions announcements "this week."
In a virtual address to the United Nations Security Council on Tuesday, Zelenskyy detailed to the 15-member body what he said were war crimes committed by the Russian forces that have invaded Ukraine, accusing them of deliberately killing adults and children, and trying to burn their bodies.
"Russian troops are deliberately destroying Ukrainian cities to ashes with artillery and airstrikes. They are deliberately blocking cities, creating mass starvation. They deliberately shoot columns of civilians on the road trying to escape from hostilities. They even deliberately blow up shelters where civilians hide from airstrikes," Zelenskyy said.
While Russia has dismissed the shocking scenes as "fake," CBS News has witnessed firsthand clear evidence of atrocities in the towns and villages surrounding Kyiv. In the streets of Bucha, bodies were found in the streets, while scores more were dumped into mass graves.
The devastation left by Putin's troops has prompted new calls for harsher sanctions against Russia, including a total cut-off of oil and gas imports. Germany and France have already expelled dozens of diplomats, suggesting they were spies.
Since Russia launched its attacks against Ukraine in late February, the U.S. and its European allies have united to launch coordinated sanctions intended to cut Russia off from the global economy.
Russia's economy is forecast to contract 15% or more in 2022, a collapse of Russia's GDP that will erase the past 15 years of economic growth, according to an analysis from the Institute for International Finance.
source: https://www.cbsnews.com/news/russia-sanctions-putin-daughters-banks/