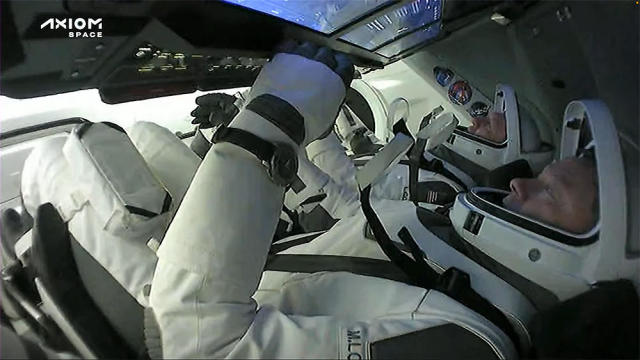 The first fully commercial, non-government crew to visit the International Space Station plunged back to Earth Monday, descending across the heartland of America to a picture-perfect splashdown off the coast of Florida to close out an extended, first-of-a-kind mission.
Descending under four taut parachutes, the Crew Dragon "Endeavour," carrying commander Michael López-Alegría, Ohio real estate executive Larry Connor, Canadian philanthropist Mark Pathy and Eytan Stibbe, the second Israeli in space, set down with a splash at 1:07 p.m. EDT to wrap up a 17-day mission.
SpaceX crews deployed nearby quickly approached the gently bobbing capsule to make initial contact with the returning station fliers while a recovery ship moved in to pull the spacecraft aboard.
The crew was expected to fly back to the mainland via helicopter and then to remain in Florida for several days for observation and to complete medical and other research they carried out aboard the space station.
Splashdown came a week later than originally planned because of high winds and rough seas in the available landing sites in the Gulf of Mexico and the Atlantic and to avoid conflict with a Russian spacewalk early last week.
But with a forecast calling for near-ideal conditions Monday, López-Alegría and his crewmates bid the station crew farewell and undocked from the lab complex Sunday evening, enjoying a final "night" in space before heading home.
The descent began at 12:16 p.m. when the Crew Dragon, after shedding its no-longer-needed trunk section, fired its nose-mounted braking rockets for about nine minutes, slowing the ship by some 130 mph, just enough to drop out of orbit on a trajectory toward the Florida coast.
After a half-hour free fall, Endeavour slammed into the discernible atmosphere, using its SpaceX-designed heat shield to dissipate the 2,000-degree temperatures generated by atmospheric friction.
After a steep northwest-to-southeast trajectory across the heartland of America, the spacecraft's four main parachutes deployed and less than five minutes later, Endeavour splashed down within sight of recovery crews.
With the Axiom-1 crew safely back on Earth, NASA and SpaceX are pressing ahead with plans to launch four professional astronauts to the space station Wednesday atop a Falcon 9 rocket Wednesday.
The Crew-4 astronauts — commander Kjell Lindgren, pilot Bob Hines, geologist-astronaut Jessica Watkins and European Space Agency astronaut Samantha Cristoforetti — are scheduled for blastoff at 3:52 a.m. Wednesday, setting up a docking at the space station Wednesday night.
Lindgren and his crewmates are replacing Crew 3 commander Raja Chari, pilot Thomas Marshburn, submariner-turned-astronaut Kayla Barron and European Space Agency astronaut Matthias Maurer, who were launched to the station last November. They're expected to return to Earth with a splashdown of their own around May 2.
The just-completed Axiom-1 mission was the sixth piloted flight of a SpaceX Crew Dragon, the second carrying non-professional astronauts on commercial missions to low-Earth orbit and the first to make a fully commercial visit to the space station.
The mission was carried out with NASA's cooperation and encouragement, part of an agency initiative to spur private-sector utilization of the International Space Station and the eventual development of commercial research stations in Earth orbit.
Unlike wealthy "space tourists" who have visited the space station in the past escorted by Russian cosmonauts, the Ax-1 crew carried out multiple biomedical experiments, technology demonstrations and public outreach, mirroring the sort of work future NASA-sanctioned commercial crews are expected to carry out aboard the space station.
Houston-based Axiom Space paid SpaceX an undisclosed amount for the flight while paying NASA for space station resources and assistance by the lab's professional crew. The negotiated cost of the mission covered the possibility of launch and landing delays.
López-Alegría, a former astronaut and Axiom vice president, flew as a company representative while Connor, Pathy and Stibbe paid for their seats. No cost figures were released by Axiom, NASA or the three paying passengers, but NASA's inspector general has estimated the cost of a Crew Dragon seat at around $55 million.
Axiom Space plans to launch several "private astronaut missions" as the company develops research and habitation modules that will initially be attached to the International Space Station and then fly on their own as a stand-alone lab complex after the ISS is retired.
Bill Harwood has been covering the U.S. space program full-time since 1984, first as Cape Canaveral bureau chief for United Press International and now as a consultant for CBS News. He covered 129 space shuttle missions, every interplanetary flight since Voyager 2's flyby of Neptune and scores of commercial and military launches. Based at the Kennedy Space Center in Florida, Harwood is a devoted amateur astronomer and co-author of "Comm Check: The Final Flight of Shuttle Columbia."
source: https://www.cbsnews.com/news/spacex-commercial-crew-returns-to-earth-atlantic-ocean-splashdown/