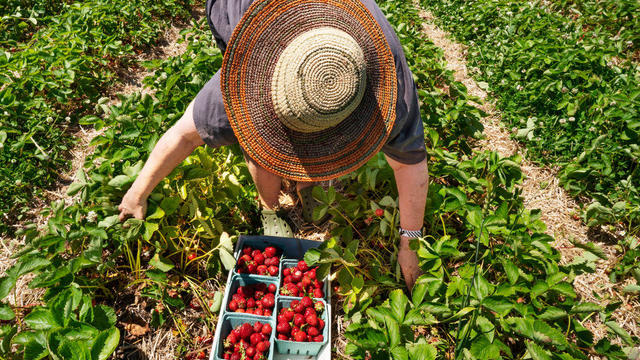 Strawberries continue to remain at the top of Environmental Working Group's (EWG) "Dirty Dozen" list. Published each year since 2004, the "Dirty Dozen" lists fruits and vegetables with the highest concentration of pesticide contamination.
The EWG says the goal of the annual list is to "educate the public about fruits and vegetables with the highest and lowest pesticide residues so consumers can make the best decisions for their families."
Following strawberries, spinach, kale, collards and mustard greens, nectarines, apples, grapes, bell and hot peppers, cherries, peaches, pears, celery and tomato also made the list for their high volume of pesticides.
According to EWG, the list is made by comparing data from the Department of Agriculture and Food and Drug Administration, which maintains data from annual crop tests.
The 2022 list found that over 90% of samples taken of strawberries and other fruits on the list, including cherries, nectarines and grapes, tested positive for at least two kinds of pesticides.
Dark and leafy greens, including kale, collard and mustard greens and spinach were also high in total amount of pesticides.
"A single sample of kale, collard and mustard greens had up to 21 different pesticides," EWG found in the report. "On average, spinach samples had 1.8 times as much pesticide residue by weight as any other crop tested."
EWG also released a list of vegetables and fruits with the least amount of pesticides. The "Clean Fifteen" included avocados, sweet corn, papaya, onions, kiwi, cabbage, mushrooms, mangoes and more.
The news comes as some consumers are calling on legislators to ban pesticides that have been linked to health risks.
In August, the Biden administration banned the use of chlorpyrifos, a pesticide, on food crops after research linked exposure to neurological damage in children.
source: https://www.cbsnews.com/news/dirty-dozen-list-produce-pesticides-ewg/