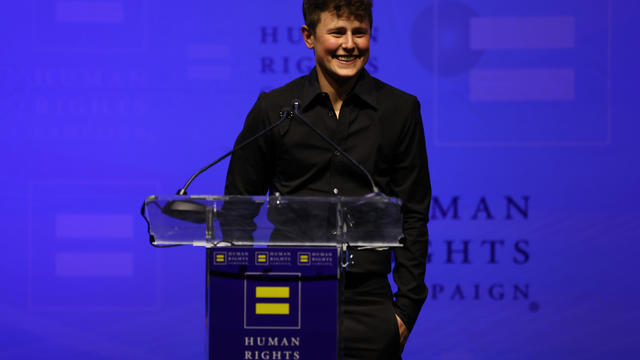 An heir to The Walt Disney Co. has publicly come out as transgender. In a recent interview, Charlee Disney described a little about their own journey, as they condemned states that have been passing bills that seek to restrict the rights of the LGBTQ community.
The 30-year-old high school biology and environmental science teacher first publicly came out last month during a gala for the Human Rights Campaign, where they announced a $250,000 matching grant to the advocacy group. They told The Los Angeles Times last week that they first privately came out as transgender four years ago.
This was one of the heir's most prominent acts of public support for the LGBTQ community. Charlee Disney told The Los Angeles Times, "I feel like I don't do very much to help."
"I don't call senators or take action," they said. "I felt like I could be doing more."
And take more action they did. Along with their donation to HRC, Disney's parents, Roy P. Disney — the grandson of the company's co-founder and Walt Disney's great-nephew — and his wife Sheri, announced that they were going to double Charlee's commitment to the group.
"Equality matters deeply to us," Roy Disney wrote in an email to The Washington Times, "especially because our child, Charlee, is transgender and a proud member of the LGBTQ+ community."
In Roy Disney's email, he also said that he, his wife and their two kids were "heartbroken" when the Florida Governor Ron DeSantis signed into the law what's known by critics as the "Don't Say Gay" law. The legislation, officially called the "Parental Rights in Education" bill, bans classroom discussion or instruction on sexual orientation and identity in kindergarten through third grade, as well as in older grades when it is done in "a manner that is not age-appropriate or developmentally appropriate."
The family's statements came after The Wald Disney Company faced significant backlash about Florida's law. After the company was initially silent over the legislation, its CEO, Bob Chapek, emailed employees that he had met with LGBTQ members of the company, but that corporate statements "do very little to change outcomes or minds."
"Simply put, they can be counterproductive and undermine more effective ways to achieve change," Chapek wrote, according to The Los Angeles Times.
Walt Disney Company later issued a statement, saying the law "should never have been signed into law."
Statement from The Walt Disney Company on signing of Florida legislation: pic.twitter.com/UVI7Ko3aKS
For Charlee Disney, Florida's new law is just another hurdle that the LGBTQ community, particularly those who are transgender, must jump over. Their own journey has been difficult, they told the Los Angeles Times.
"I had very few openly gay role models," they said. "And I certainly didn't have any trans or nonbinary role models. I didn't see myself reflected in anyone, and that made me feel like there was something wrong with me."
Charlee Disney told the newspaper that LGBTQ youth deal with high rates of depression, anxiety, bullying and suicide. According to a 2021 national survey by advocacy group The Trevor Project, 42% of LGBTQ youth seriously considered attempting suicide in the past year, including more than half of transgender and nonbinary youth. More than half of transgender and nonbinary youth in middle or high school were bullied.
"Then to put something like this law on top of that? They can't learn about their community and their history at school, or play sports or use the bathroom they want to use?" Charlee Disney said.
Bills such as Florida's only make matters worse, they said.
The Trevor Project's 2021 survey found that when LGBTQ youth are in gender- and sexual orientation-affirming spaces, the rates of suicide attempts were lower. They also found that LGBTQ youth who learned about LGBTQ issues or people in school had 23% lower odds of reporting a suicide attempt.
"The fight isn't over," Roy Disney told The Washington Times. "And we are determined to do everything we can to stop this from happening in other places."
Li Cohen is a social media producer and trending reporter for CBS News, focusing on social justice issues.
source: https://www.cbsnews.com/news/charles-disney-blasts-florida-dont-say-gay-bill-after-coming-out-transgender/