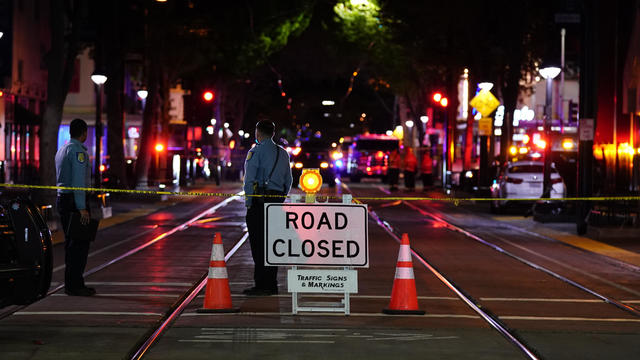 At least five shooters fired guns during a mass shooting in Sacramento, California that left six people dead and 12 others wounded, police said Wednesday. As authorities continue to investigate the fatal shooting, the deadliest in Sacramento's history, the number of identified shooters in the incident could grow.
On Sunday, a fight between at least two groups of men broke out in downtown Sacramento at about 2 a.m. local time. Sacramento police officers arrived to find a large crowd, including three men and three women who were pronounced dead.
The Sacramento Police Department said Wednesday that it's "increasingly clear that gang violence is at the center of this tragedy." Officials were unable to provide details on the specific gang affiliation of those involved, but said "gangs and gang violence are inseparable from the events that drove these shootings."
Police have arrested three individuals so far amid the incident's investigation: Daviyonne Dawson, 31; Dandrae Martin, 26; and Smiley Martin, 27.
"This tragedy downtown is a very public example of what families in many of our neighborhoods know too well," Sacramento Police Department Chief Kathy Lester said in a statement. "The suffering inflicted by gang violence does not limit itself to gang members. It spills over to claim and shatter innocent lives and harm our entire community."
Tori B. Powell is a breaking news reporter at CBS News. Reach her at [email protected]
source: https://www.cbsnews.com/news/sacramento-mass-shooting-gang-violence-police/